Jon Jones Looking for His Big Money Fight. Might Have to Wait for a Very Long Time. 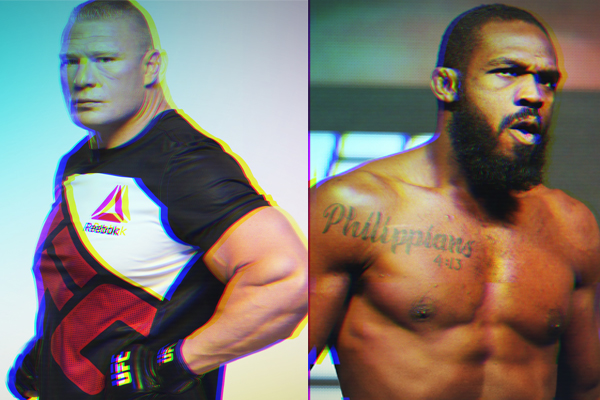 Speaking on the Jim and Sam Show, Jones told the hosts that he wants “to just dare and to reach, reach higher”.

It’s a big money fight for both, as Brock Lesnar attracts huge crowd from his wrestling fan base and the casual MMA fans, while any MMA fan would love to watch Jon Jones compete in a super fight. It’s a win-win situation for everyone. But there’s a glitch.

Lesnar last fought inside the octagon over a year ago (July 2016) against Super Samoan Mark Hunt, but his win was overturned to a no contest as he failed couple of drug tests then suspended for a year and fined $250K. It was reported that he had used estrogen blocker clomiphene in both in-and out-of-competition drug test for his UFC 200 fight, leading to the failed tests. Mark Hunt has been vocal about this issue and has criticized Lesnar of cheating. Hunt commented “Look at these F***ers. You’ve got Jon Jones for instance. That guy is the best, one of the best fighter in the world, but he’s a cheater…. just like Brock Lesnar. You’re all a pack of frickin dog cheats, that’s all you are. Nothing Else”.

This hypothetical match up might not see it’s daylight for its own reasons. Firstly, Brock Lesnar has retired for the second time from the UFC. Second, he is currently tied up with the WWE and under contract. For him to again make a comeback to the UFC will require a lot of effort from Dana White. Third, he is still in suspension and might take a possible return in summer 2018 if he ever plans to come back. Fourth, Lesnar needs to re-enter the USADA drug testing pool – a process which usually takes 6 months to complete and there is no way this can be bypassed.

One other fellow heavyweight who has shown his disregard for the return of Lesnar is Stefan Struve. He believes “Cheaters should not be in the UFC and that the UFC made a big mistake last time by bringing Lesnar in and giving him a four-month exemption before his fight so that USADA wouldn’t have tested him for four months”.

As for Brock Lesnar, he is ready for the Jones fight anytime, anywhere. But looking at the current situation both the fighters will have to wait for a very long period. As the Mayweather-McGregor dust settles in other light heavyweights have started to line up for Jones including a trilogy fight against DC, a rematch with Gustafson.