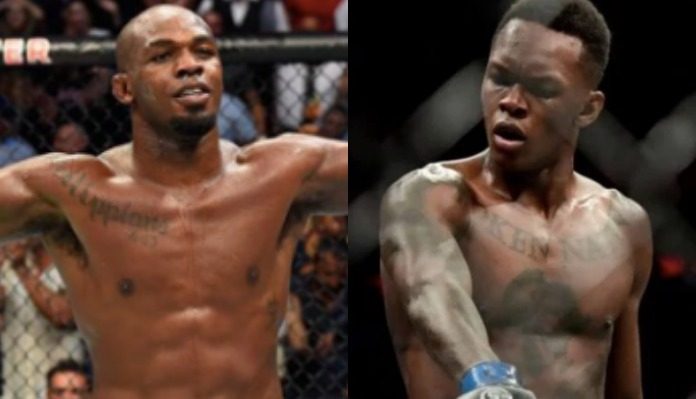 Jon Jones appeared on Ariel Helwani’s MMA Show recently and he had to say something about Israel Adesanya.

The interim UFC middleweight champion believes he’ll one day jump up in weight to take out “Bones.”

Jones said that he doesn’t see Adesanya as much of a threat.

“I really don’t,” Jones said. “I really don’t. I think the worst thing I ever said about the kid was that he’s looking promising and I would assume that people are going to start entertaining that fight soon and he’ll come up and challenge me. That’s all I said about him. And I think he said something about killing one GOAT in Anderson Silva, and now trying to kill me.

“Or some sh*t like that. The biggest difference is that, I’m 31-years-old, and I feel like I’m still reaching my prime. If you look back throughout a lot of my fights, you hear a lot of guys say ‘Jon is a lot stronger than he looks.’ And Israel is light in the ass, he’s light, he’s skinny. I put my hands on him and teach him a whole different world of hurt. For him to be so frail and to not have a ground game, it’s like, bro, you don’t want to do it.

“And then to talk about my standup against Anthony Smith, with his face all bubbled up against a short wrestler [Kelvin Gastelum] that just did that to him. It’s just hilarious. I barely get touched in my fights. And so, for Israel to talk about his striking skills being so farther ahead of mine is hilarious. Just something when I think about him I think about he’s a little too light in the ass, he needs to eat some more jerk chicken and then come holler at me.”