Former UFC light heavyweight champion Jon Jones is finally moving up to the heavyweight division after ruling the 205 lbs division for a decade.

Speaking to ESPN, Jon Jones explained the move up to the heavyweight division. He stated that he didn’t feel the motivation to stay at 205lbs weight class and hence moved up to motivate himself. 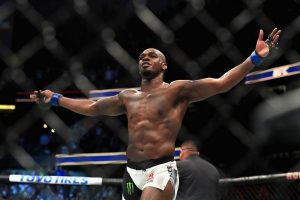 “The light heavyweight division was fun, but I just wasn’t scared of those guys anymore,” Jones told ESPN. “Like, none of them. And I think it showed in some of my performances. Obviously, I still trained hard. But there was no urgency in some of my last fights.

“With these next guys I’m going to be going up against, I respect these guys. These guys are intimidating – they’re intimidating as (expletive). It just gets me up in a whole different way.”

The heavyweight title will cement Jon Jones’ legacy as the GOAT

While there hasn’t been any opponent in place for Jon Jones, he isn’t hurried about his heavyweight debut. Instead, he is training hard and bulking up to 240lbs.

“I go back and forth,” Jones said. “Sometimes I think I should take like a top-10 guy (at heavyweight) and just get my feet wet, figure out what’s happening. And then the other times, I think, ‘(Expletive) it. Let’s just go big or go home.’ I’m trying to get these big-money fights these days. I like taking care of everybody around me.”

“But I just don’t want there to be any debate. And one way I can do that is by capturing this heavyweight crown, and that’s exactly what I’m going to do.”

Who do you guys think Jon Jones should fight in his heavyweight debut? Let us know in the comments section below.