Jon Jones recently expressed the desire to move to heavyweight and challenge Stipe Miocic for the title and has even vacated his UFC light heavyweight title. Jon Jones announced the decision to vacate his title after Stipe Miocic beat Daniel Cormier in at UFC 252, and though Dana White previously said that Francis Ngannou is next in line for a shot at the heavyweight title, he does admit that things could play out differently if Jon Jones indeed moves up to heavyweight. 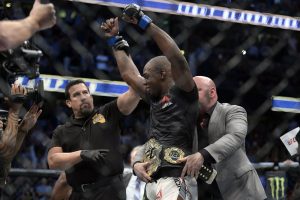 Jones and the UFC had been publicly feuding over money since May when Jones expressed interest in moving up to heavyweight to fight feared knockout artist Francis Ngannou. Although White has accepted the fact that he is willing to grant Jon Jones an immediate title shot at heavyweight, the UFC frontman also said that he hasn’t spoken to “Bones” regarding his plans for the future recently and that he has no idea about what the UFC #1 pound-for-pound fighter wants to do next.

Just a few hours back, Jon Jones tweeted the reason for vacating his belt :

This is the first time Jones has willingly given up his title as well. He was stripped of the title in April 2015 after defeating Daniel Cormier for “violating the UFC’s Athlete Code of Conduct” following a hit-and-run accident in New Mexico. He was then stripped of the belt in April 2016 following a failed drug test, and again in August 2017 for another failed test.

Jones had expressed interest at the time in finally moving up to heavyweight for a battle with top contender Francis Ngannou, but White claimed Jones was asking for too much money. White said Jones wanted to be paid like former boxing heavyweight champion Deontay Wilder. It seemed Jones would rematch Reyes for his light heavyweight title after many fans felt Reyes had deserved the decision at UFC 247 in February, which would have been Jones’ first legitimate loss in MMA.