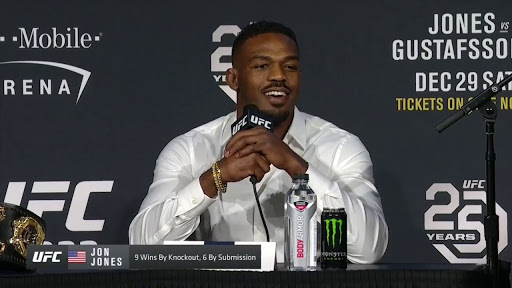 However the questions asked by journalist Izabelle Kostic from Kimura Sweden stood out. Kostic asked a fairly logical question to Jones as to why is he involved in an another controversy related to drug tests. Jones however picked up the mic saying “next question”, thus ignoring the question.

Kostic asked a similar question to White and pointed to the fact that why was Jones not given a suspension like former heavyweight champion Frank Mir who was tested positive for the same substance (Turinabol). Despite White asking Kostic to repeat the question, Jones interrupted saying, “Sit down. Someone take the mic from her. Better questions. Better journalism. You suck. Have you been listening?”, while showing her a thumbs down as the crowd booed.

However Jones’ behaviour received harsh criticism from the MMA community. (via Twitter):

I couldn't watch today's UFC 232 presser live so just caught up with everything. Have to say, I was really disappointed to see how Izabelle Kostic from @kimurasweden was treated when asking her questions, which were more than fair. I just spoke to her and she's in good spirits.

much anticipated main event looked in serious jeopardy as former light heavyweight champion Jon ‘Bones’ Jones once again lost the toughest battle of his career, that is with the drug tests.

For the third time in his career, Jones has been tested positive for a banned substance. This time however for a familiar substance in an androgenic steroid, Turinabol.