Although Cormier has said on numerous occasions that the weight cut to 205lb has been horrendous for him, he said that he is willing to make that exception to fight Jones at that weight class. 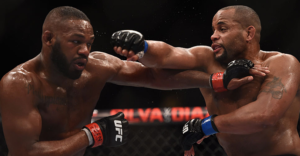 Jones who is all set to defend his UFC light heavyweight title against Thiago Santos at UFC 239 in Las Vegas hasn’t stopped verbal attack on his fiercest rival. Jones who recently appeared on Ariel Helwani gave his thoughts on Daniel Cormier willing to move to 205lbs to fight him.

“He won’t do it. I think it takes a lot out of him to make the weight cut.” Jon Jones explained. “I haven’t seen him in person, but I hear he’s bigger than ever and to lose all that weight and come up short a third time… It just takes a lot of courage I would imagine.

”I don’t think he has the balls to do it. I think he knows what to say to people to appear not afraid of me. But, deep down inside, he knows what’s it like after losing to me twice. Going him. Crying. I just doubt that he’s going to do that to himself again.”

Daniel Cormier is currently scheduled to defend his heavyweight title against Stipe Miocic in a rematch.

What do you guys think about this? Is Cormier serious about fighting Jon Jones at light heavyweight?