Jon Jones thinks God chose him to be the greatest fighter of all time.

In the main event of UFC 285 on March 4 versus Ciryl Gane for the heavyweight title, Jones is scheduled to make a comeback to the Octagon. If Jones prevails, he would establish himself as one of the greatest fighters of all time, if not the best. He will also become a two-division champion. 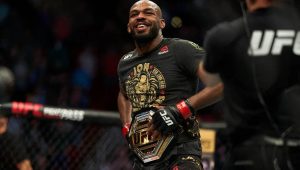 Jon Jones is the chosen one

However, according to Jones, he claims that the reason why he is so good is because God himself chose him to be this good and unbeatable. Jones asserted that he will never lose, despite the possibility of close matches.

“I really believe in my whole heart that I was chosen by God Himself to be an undefeated fighter,” Jones told MMA Underground (h/t MMA Mania). “I really believe that with my whole spirit and my whole being. So not only do you have to beat me, but you have to beat the God I serve. I don’t believe that I was designed to lose. I may have close fights, but I truly don’t believe it’s possible for me to lose.”

Of course, Jon Jones does technically have a defeat against Matt Hamill on his record due to a DQ. In a battle that perhaps should have been stopped before “Bones” threw the illegal elbows, he lost by throwing 12-6 elbows. Dana White and others have spoken out strongly in an effort to get that reversed, although it is unlikely that they will succeed.

The last time Jon Jones (26-1 with one No Contest) competed was at UFC 247 in February 2020, when he decisively defeated Dominick Reyes. Prior to then, he successfully defended his championships in back-to-back fights against Thiago Santos and Anthony Smith after regaining it at UFC 232 with a TKO victory over Alexander Gustafsson. In the course of his career, “Bones” has defeated noteworthy opponents including as Vitor Belfort, Glover Teixeira, Rampage Jackson, Lyoto Machida, Shogun Rua, and Chael Sonnen.