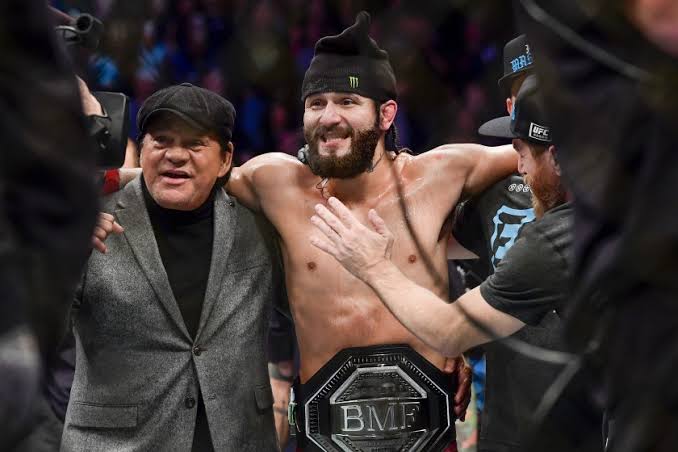 UFC 244 at Madison Square Garden featured an epic main event of two gangsters as Jorge ‘Gamebred’ Masvidal defeated fan favorite Nate Diaz via third round doctor stoppage to clinch the BMF title wrapped around his waist by none other than Dwayne ‘The Rock’ Johnson.

Diaz did suffer two huge cuts around his eye however the doctor stoppage, considering the magnitude of the fight, did made the end a bit anticlimactic. However, the fight for how it lasted, Masvidal showcased clinical destruction of Diaz.

Later on in the night at the post-fight press conference, a pizza eating Masvidal was asked whether he would step up on short notice for the UFC 245 welterweight title fight incase champion Kamaru Usman or Colby Covington don’t make it. Despite needing medical attention for some of his injuries, Masvidal claimed he will save the day, only if the pay is decent. Masvidal also claimed that neither of the UFC 245 participants deserve to fight him keeping in mind their wrestling dominant style.

“I’d be the hero they need, but they don’t deserve, man,” Masvidal said (via MMAJunkie). “They’d have to whip out the check book like they haven’t done it. My hands are f**ked up, man. I usually don’t say too much about my injuries, but my hand is a little jacked up, man. I need some rehab on it. So if I was to get in there, especially with those crotch sniffers, I know I can hit them with a f**king knee or something, so I could do it.

Masvidal with three consecutive finishes has certainly raised his stock to one of the highest needle movers in the UFC.