Veteran UFC flyweight contender Jose Torres has been cut from the UFC and he has recently given an interview to MMAJunkie and that UFC is planning to scrap the 125-pound division very soon. He announced his departure on his Twitter account.

Last month, former UFC flyweight champion Demetrious Johnson was traded to ONE fighting championship for Ben Askren and there were rumors about UFC scrapping the flyweight division. Even Henry Cejudo said that he was planning to move up soon and with no big name at flyweight, the possibility of UFC cutting the division looks highly likely now. 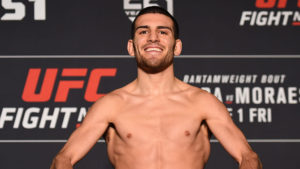 “The flyweight division is going,” Torres said. “I did kind of call it. Sadly, because I called it and because I was publicly talking about it first, it probably was because of that [I was] first on the chopping block. So sadly, I am not a UFC fighter anymore, I am a free agent. You know, it’s part of the sport. This stuff happens. Again, sadly we didn’t pick up enough fanbase for the UFC. I appreciate every opportunity I was given.

“Sadly again, 29 days, two fights, 54 pounds to prepare for my last two opponents. Given my last fight wasn’t the best and I won my first one by a ‘lucky knockout,’ I was on the chop block because of it. So, who wants to sign me? I’m looking for a fight”.

Jose Torres is 1-1 in the UFC, with a knockout win over Jared Brooks and a knockout loss to Alex Perez.

As far as Flyweight champion Cejudo is concerned, it’s highly likely that he will end up fighting current bantamweight champion, T.J Dillashaw.

Previous article
Floyd Mayweather says he never agreed to an official bout with Tenshin Nasukawa.
Next article
Donald Cerrone: No wrestling, only striking against Mike Perry