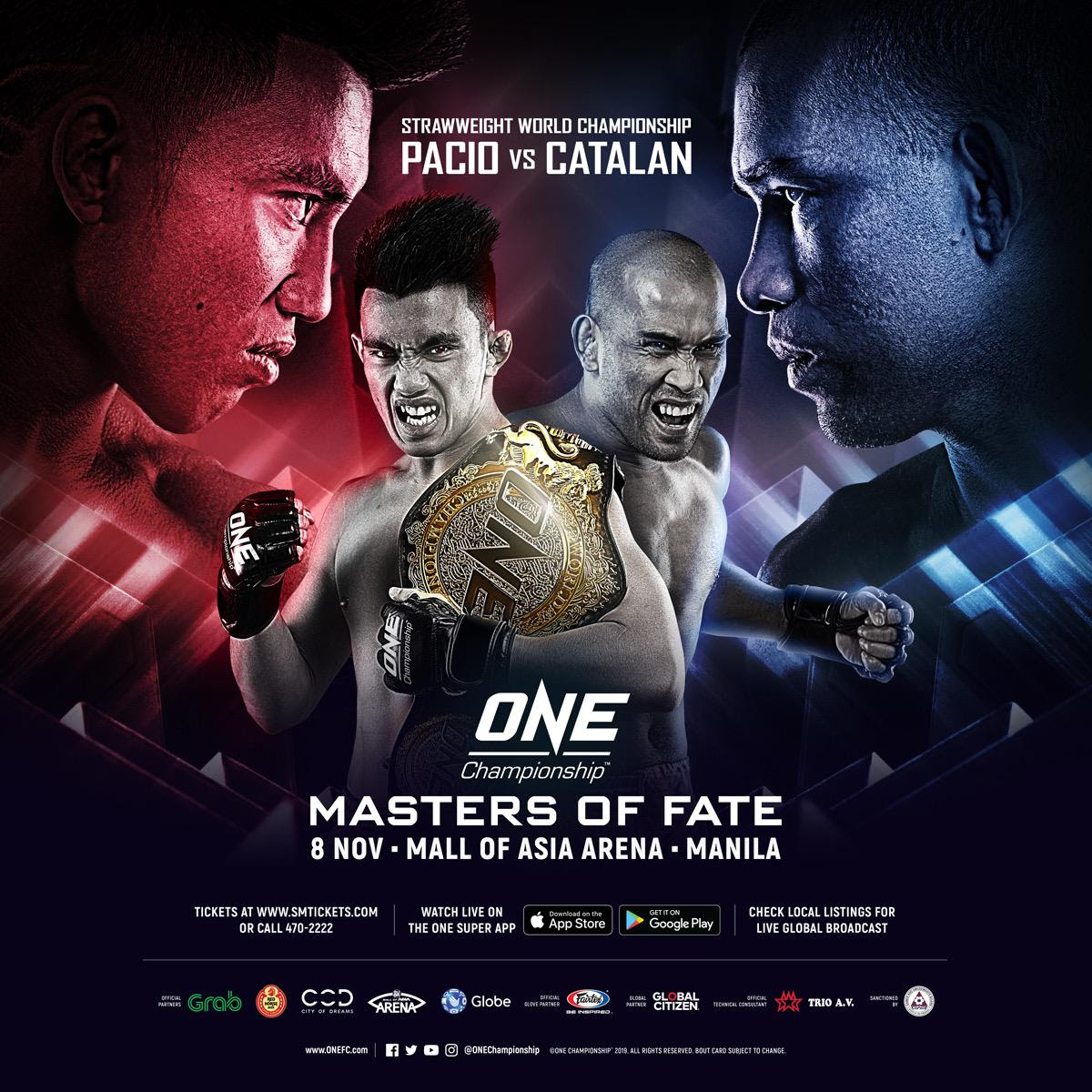 INITIAL BOUTS ANNOUNCED FOR ONE: MASTERS OF FATE

The largest global sports media property in Asian history, ONE Championship™ (ONE), has just announced its return to Manila, the bustling capital of the Philippines. This 8 November at the Mall of Asia Arena, ONE: MASTERS OF FATE will see the world’s best martial arts talent take the ONE Championship ring to showcase their skills. In the main event, reigning ONE Strawweight World Champion Joshua “The Passion” Pacio of the Philippines will defend his title against countryman Rene “The Challenger” Catalan.

The 23-year-old from Baguio City captured the strawweight belt with a unanimous decision victory over Japanese veteran Yoshitaka Naito in September of 2018 but surrendered the title to another Japanese warrior in former Shooto champion Yosuke Saruta in his first defense. Months later, Pacio avenged that defeat by knocking Saruta out with a head kick to regain ONE Championship gold. Now, Pacio is looking to make the first defense of his second strawweight title reign against Catalan.

Catalan, on the other hand, is currently the hottest strawweight in the division who is riding an impressive six-bout win streak. The Philippine Wushu Champion and veteran martial artist stopped former champion Naito in the first round of his most recent outing, earning him a shot at the ONE Strawweight World Championship. Catalan now faces Pacio in a highly-anticipated all-Filipino showdown for the strawweight throne.

Former two-time ONE Lightweight World Champion Eduard “Landslide” Folayang of the Philippines is on the comeback trail. He is scheduled to face MGL-1 FC Lightweight Champion Amarsanaa “Spear” Tsogookhuu of Mongolia in the evening’s co-main event. The veteran member of Team Lakay will have to deal with Tsogookhuu’s uncharted power, as the Mongolian boasts of a solid knockout ratio featuring three stoppages out of five victories.

In a ONE Super Series Muay Thai bantamweight contest in 4-ounce gloves, Sangmanee “The Million Dollar Baby” Sathian MuayThai of Bangkok, Thailand takes on Azize “The Magician” Hlali of France. Despite being just 22 years old, Sangmanee has already achieved multiple honors in the sport including seven Muay Thai World Championships. He is a well-respected competitor in his home country and has defeated some of Muay Thai’s biggest names. Hlali, who trains out of Venum Training Camp, is a two-time Muay Thai World Champion.

Former ONE Flyweight World Champion Geje “Gravity” Eustaquio of the Philippines and CWFC Bantamweight World Champion Toni “Dynamite” Tauru of Finland will run it back in a highly-anticipated rematch. In their first encounter back in 2016, Tauru submitted Eustaquio via first-round rear-naked choke. Since then, Eustaquio has gone on to capture the flyweight belt twice. Now he faces Tauru once again this time at flyweight.

ONE Atomweight Kickboxing and Muay Thai World Champion Stamp Fairtex of Thailand continues her quest for a mixed martial arts world title when she faces top women’s atomweight Bi “Killer Bee” Nguyen of Vietnam and the United States. The 21-year-old Stamp recently impressed in her return to the Circle, defeating Asha Roka by third-round submission. Nguyen, meanwhile, was victorious against Puja Tomar in a Muay Thai contest.

WBC and IPCC Muay Thai World Champion Alma Juniku of Australia is back in ONE Super Series action when she takes on Anne Line Hogstad of Norway in a Muay Thai atomweight contest in 4-ounce gloves. Juniku made her ONE Championship debut against none other than two-sport World Champion Stamp Fairtex last June. She is now tasked to welcome ISKA Muay Thai World Champion and promotional newcomer Hogstad to the world’s largest martial arts organization.

Former ONE Strawweight World Champion Yoshitaka “Nobita” Naito of Japan makes his much-awaited return to the ONE Championship ring when he goes head-to-head with Thailand’s Pongsiri “The Smiling Assassin” Mitsatit. Naito is on the comeback trail, having defeated fellow former ONE World Champion Alex Silva in his last outing. Mitsatit is one of the fastest rising martial arts talents from Thailand with an impressive 10-3 record. He is also a Northern Muay Thai Champion of Thailand with a 72-17 record.

Additional bouts for ONE: MASTERS OF FATE will be announced at a later date.