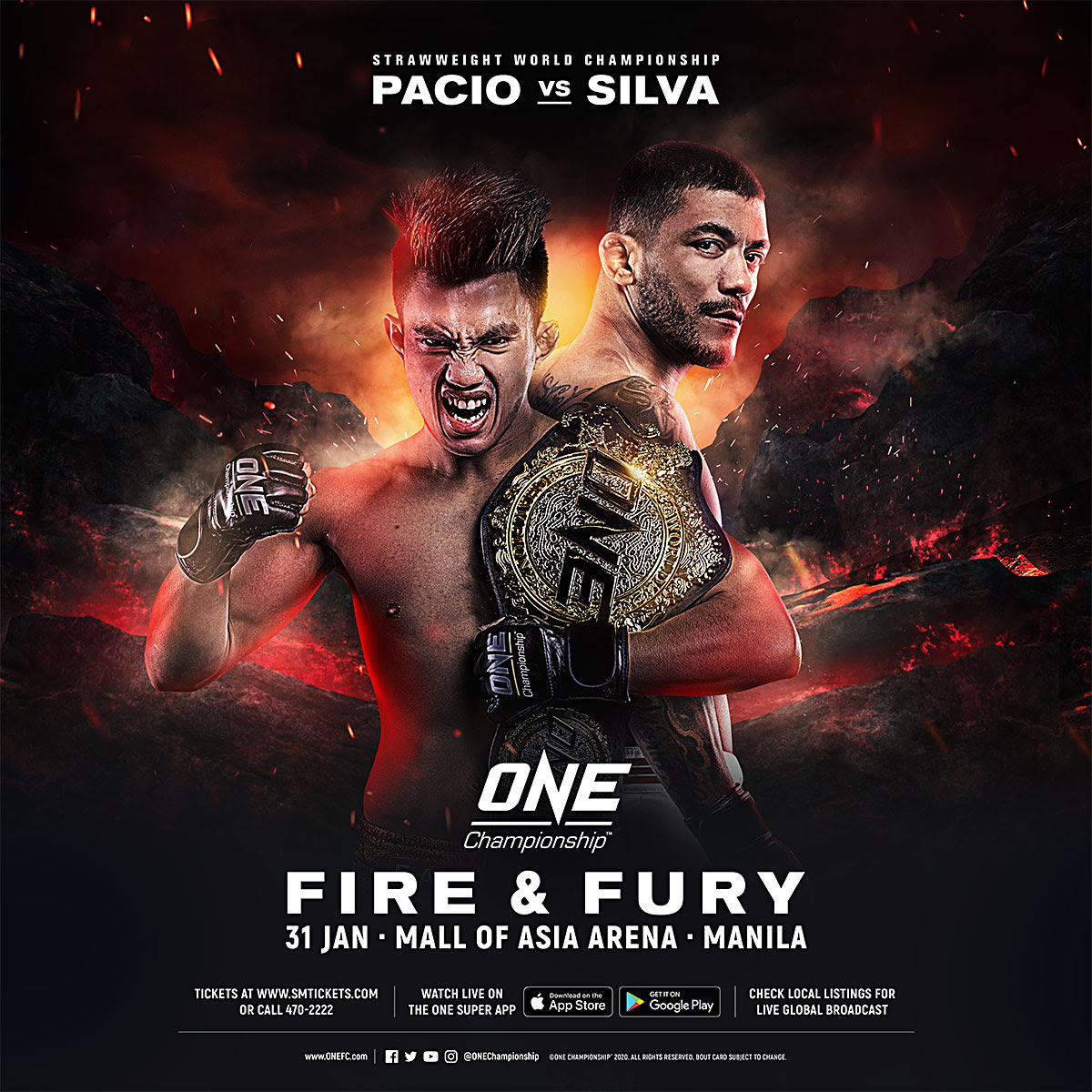 COMPLETE CARD ANNOUNCED FOR ONE: FIRE & FURY IN MANILA ON 31 JANUARY

The largest global sports media property in Asian history, ONE Championship™ (ONE), has just announced its return to the Mall of Asia Arena on Friday, 31 January. The bustling Philippine capital of Manila will play host to ONE: FIRE & FURY which brings together the absolute best in world-class martial arts.

In the main event, reigning ONE Strawweight World Champion Joshua “The Passion” Pacio of the Philippines will defend his title against Alex “Little Rock” Silva of Brazil.

The 23-year-old Pacio, who hails from Baguio City, captured the strawweight belt with a unanimous decision victory over Japanese veteran Yoshitaka Naito in September of 2018, but surrendered the title to another Japanese warrior in Shooto World Champion Yosuke Saruta in his first defense. Months later, Pacio avenged that defeat by knocking Saruta out with a head kick to regain ONE Championship gold.

Silva, a former ONE Strawweight World Champion, has been impressive as of late, earning his way back to title contention behind two incredible submission victories over Stefer Rahardian and Peng Xue Wen. The Brazilian Jiu-Jitsu black belt is one of the most dangerous grapplers in the promotion. Eight out of nine of his victories have come by way of submission.

Silva will attempt to lift the belt from Pacio in a much-anticipated showdown at strawweight.

Also on the card are Pacio’s Team Lakay teammates and fellow Filipinos who all face tough opposition.

Former ONE Lightweight World Champion Eduard “Landslide” Folayang of the Philippines returns to action against Pakistan’s Ahmed “The Wolverine” Mujtaba.

Folayang is one of the most prominent martial artists in his country — a massive sports icon loved by his people. Behind his world-class wushu skills, Folayang is on the comeback trail and believes he can make another run at the World Title.

Former ONE World Title challenger Danny “The King” Kingad is back to face China’s “The Hunter” Xie Wei.

Kingad is one of the hottest prospects in Philippine mixed martial arts. Since challenging Adriano Moraes for the title in 2017, Kingad has won six out of his last seven bouts. He blitzed through the ONE Flyweight World Grand Prix with victories over Senzo Ikeda and Reece McLaren, and then faced legend Demetrious “Mighty Mouse” Johnson in the final round. Now Kingad starts his climb back to the top anew against Xie, who earned his start on Rich Franklin’s ONE Warrior Series.

Lito “Thunder Kid” Adiwang of the Philippines looks to continue his rise through the ranks when he faces Thailand’s Pongsiri “The Smiling Assassin” Mitsatit.

Adiwang began his career in ONE Championship via ONE Warrior Series, where he railed off three impressive victories to earn a six-figure contract with the promotion. “Thunder Kid” made a successful main roster debut back in October, when he finished the highly-regarded Senzo Ikeda in the first round.

Mitsatit, on the other hand, is one of the most promising young talents out of Thailand. The Chiang Mai representative owns eight knockout victories out of 10 wins on his resume and promises to bring the action right to Adiwang in this clash of exciting strawweights.

Making her much-anticipated return to the ONE Circle is Team Lakay’s Gina “Conviction” Iniong, who takes on India’s Asha “Knockout Queen” Roka.

Iniong was last seen in the Circle last February, where she defeated highly-regarded Malaysian Jihin Radzuan via close split decision. Just recently, Iniong competed in the 30th Southeast Asian Games in Manila, where she bagged a kickboxing gold medal in the Women’s 55 KG Kick Light Category.

Looking to get back on the winning track is the Philippines’ Jomary “The Zamboanginian Fighter” Torres, who locks horns with former ONE World Title challenger Jenny “Lady GoGo” Huang of Chinese Taipei. Torres is primarily a boxer and a wrestler, while Huang is a judo black belt. Both women are hungry for victory. Fans can expect a thrilling battle between the two as only one will emerge victorious.

Also on the card is a trio of ONE Super Series Muay Thai contests.