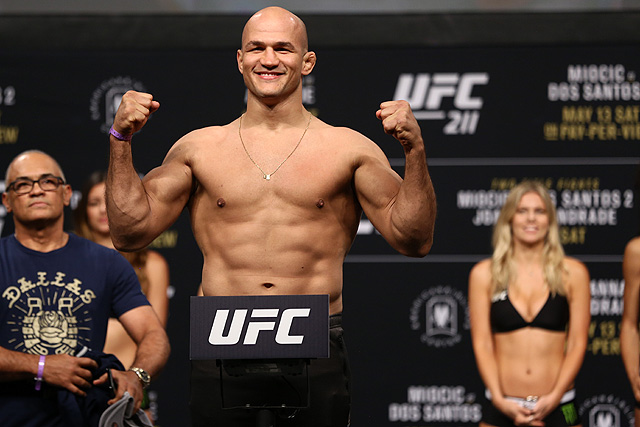 Conor McGregor’s iconic cross over from MMA to boxing has gone about to bring a revolution. After his own buddy Artem Lobov defeated former boxing champ Paulie Malignaggi, several other mixed martial artists have called out boxing champs. The latest UFC double champ Henry Cejudo called out Vasyl Lomachenko. And the newest addition to that list is Junior Dos Santos.

Currently “Cigano” is set to meet Francis Ngannou this weekend at UFC 239. But he has his plans chalked out that would end with him being the heavyweight boxing champ of the world.

Dos Santos first wants to defeat “The Predator” Ngannou. He then wants to fight for the UFC heavyweight belt. And after he has had his hands on UFC gold, he plans to challenge Deontay Wilder to a boxing fight.

“I can knock anyone out in this division and Ngannou is going to be the next guy,” Dos Santos told MMA Fighting. “I even have enough boxing to beat boxing champions.”

But would that mean a boxing powerhouse in the form of Wilder? “Cigano” didn’t think twice about bringing in the WBC heavyweight champ’s name in the discussion.

“It could be Deontay Wilder because everything I see about Deontay, he’s a great champion, he knocks everybody out and he doesn’t run away from a good match,” he said. “I can see many, many holes in his game. Can you imagine I’m not worrying about no takedowns, no kicks, no jiu-jitsu, only boxing? That would be paradise for me.”

Despite such high hopes, Dos Santos is not letting his focus wander off from his immediate enemy. His resume is currently marred by a couple of high profile defeats against Alistair Overeem and Stipe Miocic. Stopping a heavy weight juggernaut in Ngannou can strengthen his claims for a run at the 265 pound title.

“Now my biggest goal is to go back, fight for the title in the UFC, take the belt back and then start promoting a fight against one of the boxing champions,” Dos Santos said.