A heavyweight barn burner may be headed our way in the near future as undefeated prospect Ciryl Gane is expected to take on former heavyweight champion Junior Dos Santos.

The news was revealed by UFC President Dana White speaking at a media scrum in Abu Dhabi. Reportedly the fight may be scheduled somewhere in December. 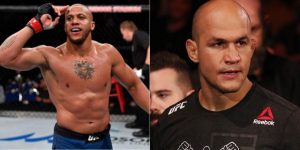 Gane vs. Dos Santos, a finish will be served!

Gane (6-0 MMA, 3-0 UFC) has had a tough string of luck for the past few months. He was slated for a fight against Shamil Abdurakhimov back in April. However, a collapsed lung forced him to pull out of the fight. He was then slated to fight Serghei Pavlovich but Pavlovich pulled out due to an injury.

“My PFL contract formally expired on Feb. 2, 2020, and there was a unilateral option from the PFL to extend my contract for two more seasons,” Delija wrote in a statement issued to ESPN. “However, since there is no [PFL] season this year and I had not received any form of payments from PFL or any compensation, this became not an option for me.

“Unfortunately, PFL wrote a letter to the UFC earlier this week saying that I was still under contract with PFL, but this, however, was not in accordance with the legal facts. My management team and my attorney pointed out the invalidity of the contract to the PFL.”

Anyway, the extended hiatus worked as a blessing in disguise for Gane as the #13 ranked heavyweight will get a chance to fight the #6 ranked former champ.

Gane has been regarded by many as a future champ. Coming in from the camp of Francis Nagnnou, many thought striking would be his forte. However, he flipped the script as he submitted a BJJ black belt on his UFC debut. He then submitted another opponent via a beautiful heel hook. He previously fought another prospect Tanner Boser a year ago and defeated him via unanimous decision.

Dos Santos, on the other hand, is coming off a three-fight knockout losing streak. Therefore, he would like to have a win and get things back on track.