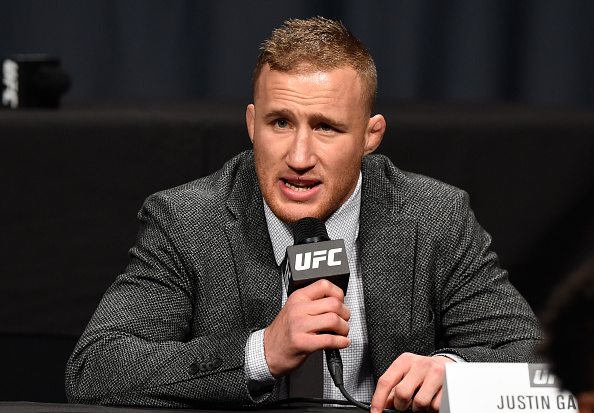 UFC 223 is just a few months away and there are a lot of speculation surrounding the co-main event of the PPV. The co headliner for the event if going to be a fight between UFC strawweight champion Rose Namajunas and former champion Joanna Jedrzejczyk. Popular UFC lightweight Justin Gaethje has given his two cents on the highly anticipated rematch. “The Highlight” has created some sensation by claiming that Jedrzejczyk will lose the rematch against Namajunas as well.

“Thug Rose” had shocked the entire MMA community when she knocked-out “Joanna Violence” in the first-round at UFC 217 to win the belt. The Polish had put the blame of her defeat on her nutritionists by claiming the she lost the fight because of a terrible weigh-cut.

Gaethje believes that ‘JJ’ is making excuses for her loss at UFC 217. He claimed that the former champion has a weak mentality for blaming her nutritionists and will likely lose again. Here’s what he told MMA Fighting in an interview:

“I don’t know her or what happened to her, so I can’t judge her for it. I think she’s weak-minded for saying it, even if it is true, It’s her own business. And no matter what, it could be true to the core and you could have proof, who’s going to [care]? Like, I’m not going to support you. Okay, whose fault was it? At the end of the day, whose fault was it? It was your fault. Do you have a scale at your house? Then you get to step on the scale every single morning, just like every single one of us do. We worry about our weight the whole camp, and I’ve never had a nutritionist help me in my entire life.

I made weight in college eating McDonalds every day. It’s willpower. You either f*cking do it or you don’t do it. Like, the nutritionist does not cut the weight for you. And yeah, it could be detrimental to your performance, so if she did cut a tremendous amount of weight, then I’m sure that she suffered tremendously, and I am excited to see Rose fight the best Joanna whenever she doesn’t f*ck up and f*ck her weight cut up.

Because she knows that Rose cut weight,” Gaethje explained. “She knows that Rose made weight. And at the end of the day, it is an excuse. Even if it’s fact, it’s still an excuse, because it was still her fault. So, I mean, as a wrestler — I’m not calling Joanna weak-minded, I’m saying that statement is weak-minded.

It’s a fight. [Jedrzejczyk] is one of the highest-level fighters in that weight class in the world,” Gaethje said. “Anybody in the top-five can beat each other on any given night in this sport. So I think she has a possibility (to win), but I don’t think — she can’t just go and change her whole (style). She can’t change the way her feet move. And Rose beat her because of the way her feet move, because she could time the way her feet move, and Rose is going to do the same thing with her feet.