UFC contender Justin Gaethje is hands down one of the most violent fighters inside the octagon. The brutal symphony of moving forward along with calculated risks, is the method to his madness. The fact that he has earned seven bonuses in six fights, calls for war every time he steps inside the octagon.

This wild style however has it’s own repercussions. Gaethje’s last three fights have been first round knockouts, but he’s bound to go into deep waters. He understands the fact that there can be a point of diminishing returns. However, there is an antidote to his poison. 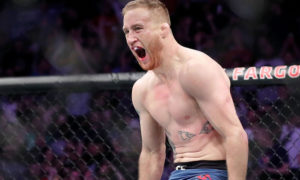 Speaking in an interview with ESPN, Gaethje revealed the only man who can save him from potential death inside the octagon. He believes it to be his head coach, Trevor Wittman. (via Twitter):

Your weekly reminder that Justin Gaethje is wired differently 😧

“I can’t trust myself to protect myself from myself,” Gaethje said. “When I’m in there, I’ve made a choice to die and if someone’s going to save me from that, it’s going to be Trevor [Wittman]”.

The effects of injuries are to be considered as the sport evolves. The term associated with contact sports injurieshas been ‘Chronic Traumatic Encelopathy (CTE)’. CTE is caused due to repeated concussions or head injuries. It can lead to consequences raging from memory loss, behavioral problems to even dementia. Having an experienced mind like Wittman along side is definitely beneficial.

Wittman started as a boxing coach in Colarado back in 1998. He eventually expanded his scope to training MMA in 2009. Wittman is famously known for serving as a coach for former strawweight champ Rose Namajunas. He is also known for training high class fighters like Pat Barry, Donald Cerrone, Roy Nelson, Matt Mitrione, Keith Jardine, Brendan Schaub, etc. He has contributed in training camps of champions like GSP, Rashad Evans, Shane Carwin and even Stipe Miocic.

Gaethje, if things fall in place, is preparing for the biggest fight of his career. He is expected to take on Tony Ferguson for the interim lightweight title on May 9. Nothing is set in stone though, due to the coronavirus pandemic. A win over Ferguson will set Gaethje for a title shot against Khabib Nurmagomedov.

Previous articleDana White confident about hosting fights starting next month
Next articleUFC News: Halle Berry reveals she was almost in a real fight with Valentina Shevchenko during movie shoot!