Heading into this fight, Khabib Nurmagomedov is a sizable betting favourite over Justin Gaethje. Fans and many people alike don’t seem to be giving Gaethje any chance in this fight.

Both Justin Gaethje and Khabib Nurmagomedov share the same manager in Ali Abdelaziz and people including Ali and UFC president’s best interest lies in Khabib winning the fight given the fact that he is the biggest star in the middle east. 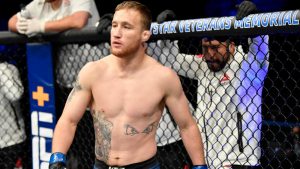 However, Justin Gaethje in an interview with Luke Thomas, he made it cleared that he wants to ruin everyone’s day by beating Khabib at UFC 254.

Gaethje also made it clear that he isn’t fazed by being the underdog going into this fight.

“I’m happy to be the underdog. I had lost when I was the favourite against Eddie Alvarez and Dustin Poirier. But I beat James Vick and Tony Ferguson, being the underdog. So that’s brilliant,” the interim champ told, during a virtual UFC media conference.

“It’s the biggest fight of my life. My confidence paired with the power I possess and the coach (Trevor Wittman) I have, it’s a dangerous combination. This sport involves a lot of hard work and skill, and a bit of luck. So, anybody can go to sleep.”

Justin Gaethje is coming off of an impressive TKO victory over Tony Ferguson at UFC 249 in May earlier this year. Prior to that, he was on a three-fight first-round stoppage victory.

Justin Gaethje vs Khabib Nurmagomedov will be like a chess match

While Khabib is an excellent grappler, it’s important to note that Gaethje also is a high-level wrestler and he hadn’t had to show it inside the Octagon.

“I’ve wrestled my whole life. A huge part of wrestling is not allowing someone to hold you down. I never had a great offence but you can’t take me down easily. I have to focus on not being on the fence. And even if I’m taken down, I have to make him work as though his life depends on it,” he added.

“This is a World Championship fight. He’s No. 2 in the pound-for-pound rankings. Controlling the distance is important in any fight. I can’t be in a straight line with him. I have to keep changing tracks. If he’s closing the distance, I at least have to threaten damage. It’s going to be a chess match against Khabib.”

Who do you guys think wins in a fight between Justin Gaethje vs Khabib Nurmagomedov?