Justin Gaethje vs Donald Cerrone confirmed for September 14 in Vancouver

In a mouth-watering matchup for the fans, Donald Cerrone is all set to fight Justin Gaethje at UFC on ESPN+ 16 in September which will take place at the Rogers Arena in Vancouver, British Columbia.

The news was confirmed by MMA Junkie after Dana White confirmed it to Yahoo Sports in a recent interview.

This will be Donald Cerrone’s fourth fight in a span of one year and he has already fought three times in 2019. Cerrone is coming off of a TKO (Doctors’ stoppage) loss to former UFC interim champion Tony Ferguson at UFC 238 last month. Before this, he was riding on a three-fight winning streak having beaten Mike Perry, Alexander Hernandez and Al Laquinta. 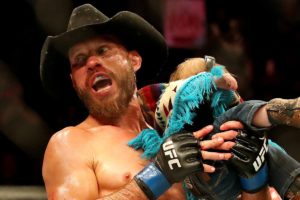 On the other hand, Justin Gaethje is coming off of a first-round KO win against Edson Barboza at UFC on ESPN 2 which took place on March 30, 2019. Before that, he beat Michael Vick via KO in round 1 at UFC Fight Night 135.

The latest UFC on ESPN+ 16 lineup includes the following fights: