Top UFC lightweight Justin Gaethje is all set to fight Donald Cerrone at UFC on ESPN+ 16 or UFC Fight Night 158 on September 14 at the Rogers Arena in Edmonton, Canada.

This fight has violence written all over it and it’s going to be an extremely fan-friendly fight. Both fighter together have racked up 24 post-fight bonuses in their career.

Justin Gaethje in an interview with MMAJunkie made it clear that this fight will deliver pure violence. 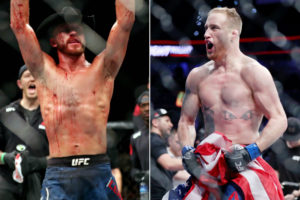 “This is pure violence,” Gaethje told MMA Junkie. “This does not need to be talked up. Cowboy has had the most fights, the most performance bonuses, this will make it the most fights ever, the most wins I think, something like that. He has all the records. So I mean, yeah. What do we need to pump up? If you’ve seen me fight, you know that I come to, I’m 100 percent right now, I’ll be 100 percent when I’m done in the fact that either I go to sleep or they go to sleep, so, that’s what I do.”

Both fighters have trained together before and Gaethje said that he wants to repay cowboy’s KO of him.

“He knocked me out … he dropped me in sparring,” Gaethje said. “I don’t even know if I had a pro fight at the time. I was a kid then and a man now and I’m excited to get in there and give him back that one, yeah.” (H/T – MMAJunkie.com)

Justin Gaethje is coming off of a first-round KO victory over Edson Barboza and on the other hand, Donald Cerrone lost his last fight to Tony Ferguson via TKO (Doctor’s stoppage).