KAMARU USMAN AND COLBY COVINGTON WILL FINALLY SETTLE THE SCORE AT UFC 245: USMAN VS COVINGTON 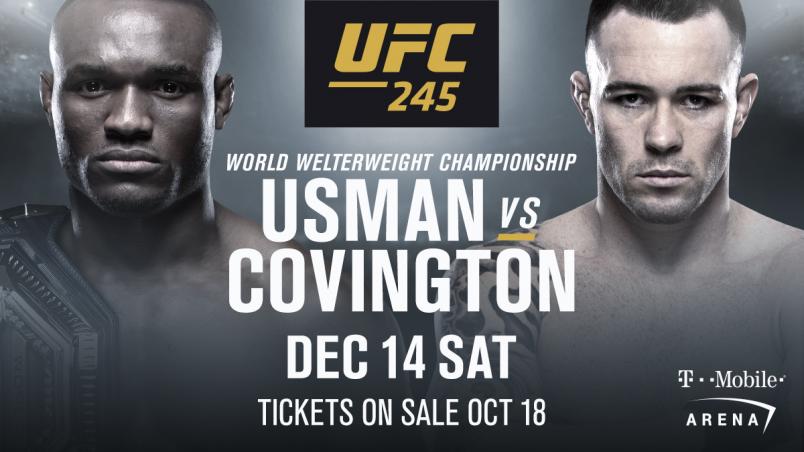 In a heated welterweight championship bout, Kamaru Usman goes for his first defense against former interim titleholder and No. 2 ranked contender Colby Covington.

Colby Covington aims to get the last laugh against Usman and capture the UFC welterweight championship. He is riding a seven-fight win streak with wins over Robbie Lawler, Rafael Dos Anjos and Demian Maia. Coming from a similar stellar background as his opponent, Covington is a two- time NCAA All-American, Division I wrestler.

Ahead of their UFC welterweight title match, Usman and Covington spoke on a variety of topics.

ON THE WELTERWEIGHT DIVISION

Usman said, “With a rivalry like this, it’s a little bit more than just business. Some of the things he’s said and the topics he’s touched on have made it really personal, actually. But my job is to go out there and take care of my business and be the UFC welterweight champion of the world. But, I can make it personal in the way that I take care of my business.”

Covington said, “They call him ‘Marty Fake Newsman’. What’s more American about him than me? People always overlook my skills because of the way I promote and market my business. If they want to get more involved with their feelings of the words I say versus how I handle my business in the Octagon, that’s their fault.”

ON THEIR OPPONENT’S STYLE

Usman said, “Besides his polarizing personality, I think he is talented. He wrestles well, he has very good endurance. His striking volume is very high. I do think he is a talented fighter. But it’s different when it’s against me. I used to think, ‘Why did these guys not perform the way I thought they’d perform when they get in here with me?’ It’s because there’s something different about the way that I approach fights. He’s going to have to feel that.”

Covington said, “I don’t care about his wrestling statistics. I’m not looking to take him down, I’m looking to knock his head off into the front row. I just know that he’s not going to take me down. If he tries, he’s going to gas himself out and I’ll finish him earlier. Wrestling I was OK at… I was made for mixed martial arts.”

ON BEING THE CHAMPION AND THE FORMER CHAMPION

Covington said, “There’s no “former” about this title, I’m America’s champion, I’m the people’s champion. More importantly, I’m Donald Trump’s favorite fighter, so I have the most coveted title in sports right now and I can’t wait to defend it this weekend.”

ON HOW THE FIGHT WILL BE WON

Usman said, “I see myself, the doctors and the referees standing over him and trying to wake him up.”

Covington said, “I definitely see this as a finish. He’ll crack under the pressure of the Colby Covington Chaos Train coming at him. He should have gotten off the tracks, but now he’s going to get run over.”