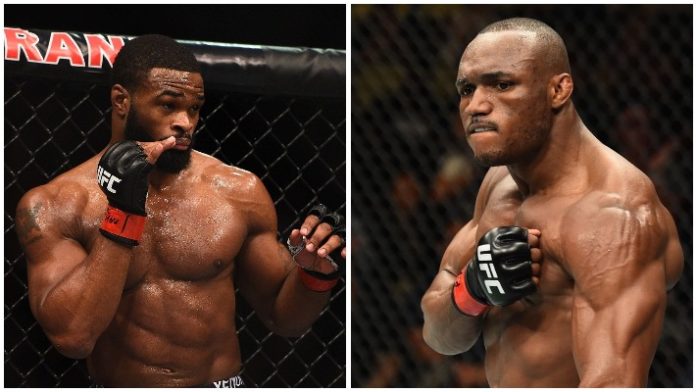 Welterweight champion Tyron Woodley is coming off of an impressive second-round submission victory over Darren Till at UFC 228 and now he is supposed to defend his welterweight title against the top contender Colby Covington or another welterweight contender Kamaru Usman.

Usman came out Wednesday on social media and said the fight was a “done deal,” Woodley quickly responded and clarified:

Bruh👀 Quit lying to these people and getting them pumped. Will fight Colby and you this year. He has to catch this fade first https://t.co/3z4Xsqm1dO

What am I lying about? Do I not have a signed contract with your name on it? Just face the reality March 2nd you’re standing across the octagon from Me. Now get your shit together and let’s run it @TWooodley https://t.co/mvgRM3MTEz

However, this time Woodley made it clear that Usman is on his radar, but he will deal with No. 2 ranked contender Colby Covington first.

Bruh…..you are coming off stupid and I don’t do Twitter Beef you got my line. But what you don’t have is a damn agreement signed by me. Now quit lying before I lose respect for you. I said I will fight both of you. The order is to be determined. Chill, take a number & fall back https://t.co/SdcYYuu46m

I’m coming off stupid…? The order has been determined by the Boss himself @danawhite now like you said you’re the only one who hasn’t signed. I wonder what that means 👀👀🤔🤔 https://t.co/cSeKcCqgpK

Now Woodley fired back and said that these tricks aren’t Umsan’s style and he can’t talk his way into a title shot.

That means you are a liar. You just said it was signed and a done deal right? You and Ali forging my signature? I love how “The Bossman” and you are so close. 6 seconds ago you were getting shit on for being 30%. Stop this isn’t your style 🤚🏽 coming off wack https://t.co/Hd4ZJ22SZc

And you can tag the world Brodie I don’t give a fuck. I fight inbthe order that best suits my legacy. Y’all bout will see what the noise is bout https://t.co/w4eog2lLCm

Clearly you don’t call the shots, and You know I ain’t Till… “I want all the Smoke” and trust me March 2nd 2019 is a good time for you to catch a fade and I ain’t talking bout a haircut. https://t.co/NjyZjlRlcJ

Look at your skin G. You don’t call the shots either. The cookie will uncrumble they way it should. Remember you were boring 20sec Ago. Now I’m really done ✅ https://t.co/q5R19p0Etw

Look at you showing yo ass now… If I’m the easy fight then shut the fuck up and sign. I’ll see you March 2nd in Las Vegas if you don’t get lost on the way #FOH #Crybaby https://t.co/LwveL2Avlh

It’s pretty evident that both guys are hating each other by the minute, who would you like to see Tyron Woodley fight next?