UFC: Kamaru Usman has a backstage altercation with Colby Covington 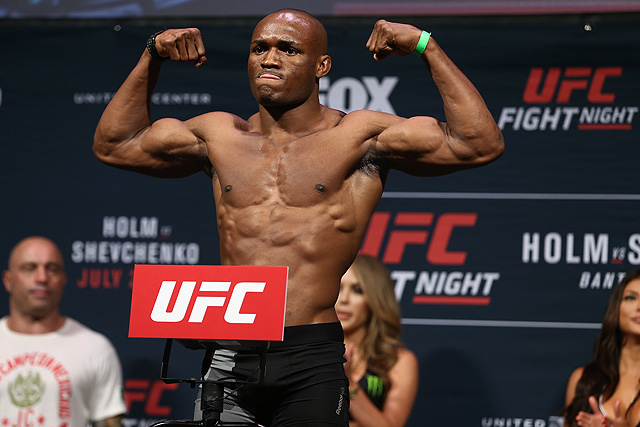 The UFC welterweight division currently has a lot of ongoing beefs and rivalries. Colby ‘Chaos’ Covington seems to be at the centre of a lot of those rivalries. Covington currently has ongoing rivalries with the UFC welterweight champion Tyron Woodley, Kamaru Usman, Rafael dos Anjos, Darren Till and the Brazilian people as well. While most of Covington’s banter has been via social media, he recently had an inperson altercation with Usman. At the recently conducted UFC 25th anniversary press conference on April 6th, 2018, Usman met Covington backstage and attempted to confront Colby about his Twitter trash talk.

The UFC too have been quick to realise the popularity of such a heated altercation and instantly released a video of the altercation on their Youtube channel.

“The Nigerian Nightmare” confronted “Triple C” backstage. However, Covington tried to avoid Usman and was simply looked in his phone. Here’s what Usman told Covington:

You only talk on Twitter, you don’t talk in person, you talk on Twitter. You just look down, yeah talk to everybody else. I’m right here, you could talk on Twitter right but can’t talk to me face to face. I’m standing in front of you, talk.

That’s what I thought. Twitter thug. What!? Say something. Why you looking at your phone, say something. Talk that sh*t you want to talk on Twitter.

Colby retaliated by saying, “Get a ranked win”.

“What!? What you do? You ain’t done nothing”, replied Usman.

Colby then told Usman, “You’re not in my league”.

Follow your league? What have you done? You haven’t done nothing. That’s why they got you yourself. You are not safe. You are not safe out here. You live 20 miles away from me. We got mutual friends. If it’s beef, we can do that. You know it. Be quiet, that’s what I thought. We live 20 miles away from each other, we can meet up. That Twitter thing is….he is a Twitter thug! Only tough on Twitter. Ain’t tough now. That’s what I thought.

Both the fighters were then separated by security. The UFC reporter recording the entire altercation then went towards Khabib Nurmagomedov and asked him about his thoughts on Usman’s confrontation of Covington. “The Eagle” chuckled and stated that it is all a big drama. However, he then cheekily took a dig at bitter rival Conor McGregor and his recent actions of attacking the UFC bus. Here’s what Khabib said:

You can watch the entire video below:

UFC: Jon Jones’ manager Malki Kawa says there is a 95% chance that he fights again in 2018