Now, the Nigerian Nightmare has a new challenge in front of him. He will be fighting top contender in the welterweight division and his former teammate Gilbert ‘Durinho’ Burns. They used to train together under coach Henri Hooft in South Florida.

Kamaru Usman is undefeated in the UFC and hasn’t lost a fight since 2014. He is riding on a fourteen fight winning streak and will be looking to extend it further. He won his title last year at UFC 245 when he defeated Tyron Woodley in a dominant fight.

Usman will be fighting top welterweight contender Gilbert Burns, who is riding on a six-fight winning streak. He defeated former champion, Tyron Woodley, in a one-sided affair. Prior to that, he knocked out Demian Maia at UFC Fight Night 170 in March earlier this year.

With that being said, Kamaru Usman’s biggest rivalry inside the Octagon has been against Colby Covington. Both parties were trash-talking with each other prior to the fight was announced and during the build-up as well.

To say that both fighters dislike would be an understatement, there’s genuine hate between both the fighters.

Last year, when Usman was on a trip to the Dominican Republic, a local approached him and told him to Kill Covington.

“I can’t wait for you to kill this guy,” Usman recalled the man saying. “Shut that man up. For good.”

Covington for the longest time has ridden the MAGA train. He openly shows his support for POTUS Donald Trump and wears a hat that has MAGA – ‘Make America Great Again’ printed on it. As a result, Covington isn’t a fan favourite amongst certain demographics.

Covington on numerous occasions has also accused Usman of using Performance Enhancing Drugs. On the other hand, Usman clearly saw the reason for Covington parading his MAGA hat and even if Usman states that he doesn’t know much about politics, he acknowledged the fact that the hat is supposed to send out a message out there.

“I don’t claim to know about politics and I stay away from it, but there’s definitely a racial element in what he’s doing,” Usman said last year. “Make America great again? Does that mean boost the economy so we’re thriving? Or let’s stop the flow of immigrants, get the blacks out and, basically, let’s make it white again?” Usman said.

While the trash-talking definitely peaked during their fight. The seeds were sown long before that. Following his victory over Woodley at UFC 235, Usman tried to get at Covington and later confronted Covington at the Palms Casino Resort in Las Vegas.

Covington even accused Kamaru Usman of playing a role in Robinson’s death, saying that he “gave Glenn a heart attack from all those years you were ducking me.” Covington event went ahead to say that Robinson “watching from hell on Dec. 14.”

At UFC 245, when the pair met, they produced tremendous back and forth action. In the fifth round, the referee stopped the fight after Covington took numerous shots. However, their fight didn’t end the rivalry and the promotion has talked about making a rematch in the near future.

What is Kamaru Usman’s religion

Although he respects Islam and was born Muslim, he converted to Christianity. 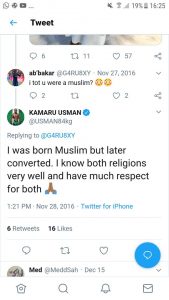 Who did Kamaru Usman lose to

Kamaru Usman’s first loss came to Jose Caceres at CFA 11 in 2013. He was initially supposed to fight Colby Covington, but the California born native had to back out of the fight and Usman took his first and only career loss to a replacement.

Where did Kamaru Usman go to college

Kamaru Usman turned professional in 2012 and was an All-American and won a national title at Nebraska-Kearney.

Kamaru Usman is currently separated and he has a daughter Samirah who was born in 2014.

UFC News: Tyron Woodley reveals what his plans for 2020 are