The sport of MMA is still growing and continues to garner popularity even today in the country. Thus, the role of Indian fighters is currently particularly important. While there are plenty of good Indian fighters competing in promotions around the globe. However, one name which stands tall among even the best Indian fighters’ is that bantamweight Kantharaj Shankar Agasa. For all fans of Indian MMA out there, Agasa is soon set to make his comeback and his next fight is now scheduled to fight the Cameroonian Jaures Dea. 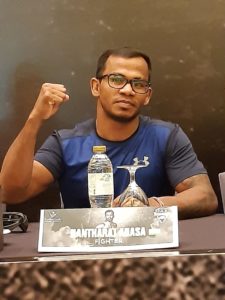 Agasa is currently one of India’s best MMA fighters with a phenomenal professional MMA record of 10-1. He was previously undefeated. However, in his last fight, he moved up in weight to fight Jalal Al-Daaja at featherweight. He lost his last fight via TKO in the second round. On the other hand, Dea has a professional MMA record of 5-2 and is currently riding high on a three fight win streak.

The fight between Agasa and Dea is set to take place at UAE Warriors Abu Dhabi. The buildup to the fight has been intense and there is certainly a lot of bad blood between the two fighters. 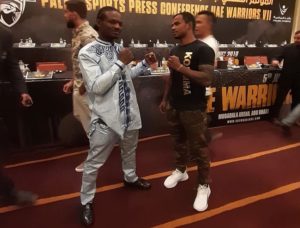 Here’s what Agasa had to say about his opponent and his antics:

I always respect my opponent. I don’t care about what he (Dea) says, about whatever trash talk he does. I am a born athlete and because of that I respect my sport of martial arts. I just want to give my best and I just want to win this fight. I am pretty sure I am going to finish this fight via ground and pound or submission.

Agasa’s coach Vishal Seigell, the Founder and Head Coach of the KOI Combat Academy is feeling extremely proud of not just Agasa and his success but for all Indian athletes who are paving way for others to follow. Below are his inspirational words for all Indian combat athletes:

I am super proud of all Indian athletes paving way at this point of time for future athletes to come. Historically, India has lacked behind in sports apart from Cricket. The focus, professionalism and respect that these athletes like Agasa, Roshan Mainam Luwang, they show cannot be doubted. It does not matter which part of India you come from, we represent the entire nation. We are here to raise the country’s flag high, and we shall do that after we are victorious and even before that.

Agasa and Dea will be fighting each other today on Friday in Abu Dhabi.