Initially, it was Paulo Costa who was supposed to fight Robert Whittaker, but the Brazilian caught flu and he had to pull out of the fight.

Robert Whittaker and Kelvin Gastelum were initially booked to fight at UFC 234 in February of 2019 at the Rod Lavar Arena in Melbourne, Australia. The fight had to be cancelled after Robert Whittaker pulled out the fight with a hernia and twisted bowl. 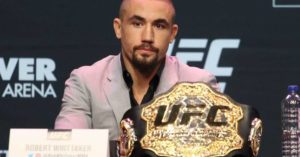 With the change, the UFC’s April 17 lineup now includes: