Kelvin Gastelum is coming off of a unanimous decision victory over Ian Heinisch at UFC 258 earlier this month. With a winning start to 2021, Gastelum plans to remain undefeated for the entirety of the year as he plans on fighting as early as March. 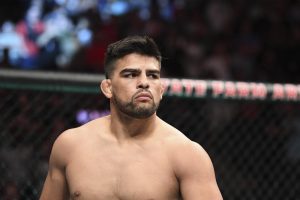 Speaking to MMAJunkie, Kelvin Gastelum said that there are plans of him fighting again at UFC 260 scheduled to take place on March 27.

“I said, ‘Hell yeah – let’s do it.’ I want to stay active. I want to continue to fight just as long as the opponent is right. I want to keep moving up the rankings, so (it’s) got to be a good opponent, as well.”

The past two years weren’t very good for Kelvin Gastelum. Prior to his fight against Heinisch, he lost to Jack Hermansson at UFC Fight Night 172 and before that he lost to Darren Till via decision at UFC 244.

Prior to that, he lost to current UFC middleweight champion Israel Adesanya at UFC 236, in what could be considered as one of the best fights of 2019. However, after breaking a three-fight losing skid, Gastelum doesn’t plan on taking an easy route. He is looking forward to fighting a higher-ranked opponent in 2021.

“That’s always been part of my thing,” Kelvin Gastelum said. “I’ve always wanted to move up the ladder, fight the best names and fight the higher-ranked names, and the UFC has always been good to me. They’ve always been really, really good to me, have given me most of the fights that I wanted to be able to move up in my career, and I’m just grateful it’s all working out. I’m just grateful that they give me the opportunities. Sometimes it works out in my favor. Sometimes it doesn’t.

“I want to fight three times at least this year, hopefully go 3-0 and keep moving up the rankings. That’s what’s on my mind.” (H/T – MMAJunkie.com)

Who do you guys want to see Kevin Gastelum fight next? Let us know in the comment section below.

Previous articleMohammed Farhad : Fighter of the week
Next articleBen Askren vows to humiliate Jake Paul inside the ring