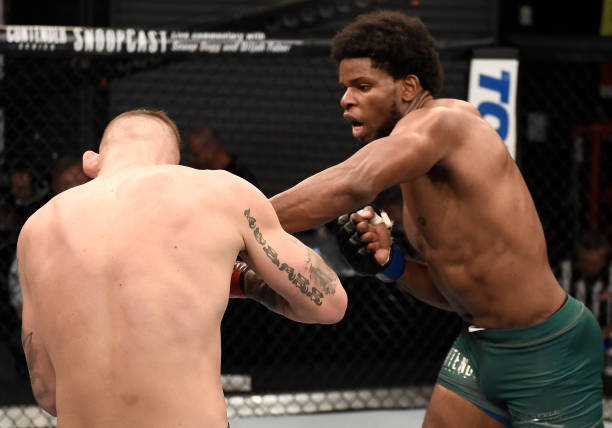 Kennedy Nzechukwu has released a statement communicating that he will be unable to compete in the upcoming championship title bout against Klidson Farias de Abreau at Brave 11 in Brazil. Nzechukwu revealed that he has suffered an undisclosed injury that makes it impossible to compete at Brave Combat federation on 13th April at Belo Horizonte. The prospect who trains at Fortis MMA, Dallas, Texas had his last fight at Xtreme Knockout 40 where he won with a first round knockout. Nzechukwu has informed the athlete relations at Brave Combat Federation that further tests are undergoing and more information will be disclosed soon.
“This is unfortunate that an immensely talented athlete like Nzechukwa had to miss the championship title opportunity early in his career. However we believe that the longterm wellbeing of the athlete is the primary objective and we wish him a quick recovery and hope to see him soon in action at Brave Combat Federation. He will be replaced with an athlete and the Light-Heavyweight championship will be defended in Brazil.”, said Mohammed Shahid, President of Brave Combat Federation.
Athlete Relations at Brave Combat Federation confirmed the statement and informed that Nzechukwu is officially off the fight card, however Klidson is still ready to be in the fight card  even for a new opponent. Brave Combat Federation will be looking for a new prospects to step into the shoes of Kennedy Nzechukwu in short notice and the replacement will be announced shortly. . Brave Combat Federation will be hosting the event in the Mineirinho Arena at Belo Horizonte, which is the biggest indoor sporting arena in Brazil. The fight night is announced to take place on April 13, 2018.

- Advertisement -
Previous articlePhotos- The Nick newell Story
Next articleUFC:Robert Whittaker vs Yoel Romero set for UFC 225 in Chicago,Whittaker gives his prediction regarding the fight