KEVIN BELINGON AND MARTIN NGUYEN FACE-OFF AT ONE: REIGN OF KINGS PRESS CONFERENCE 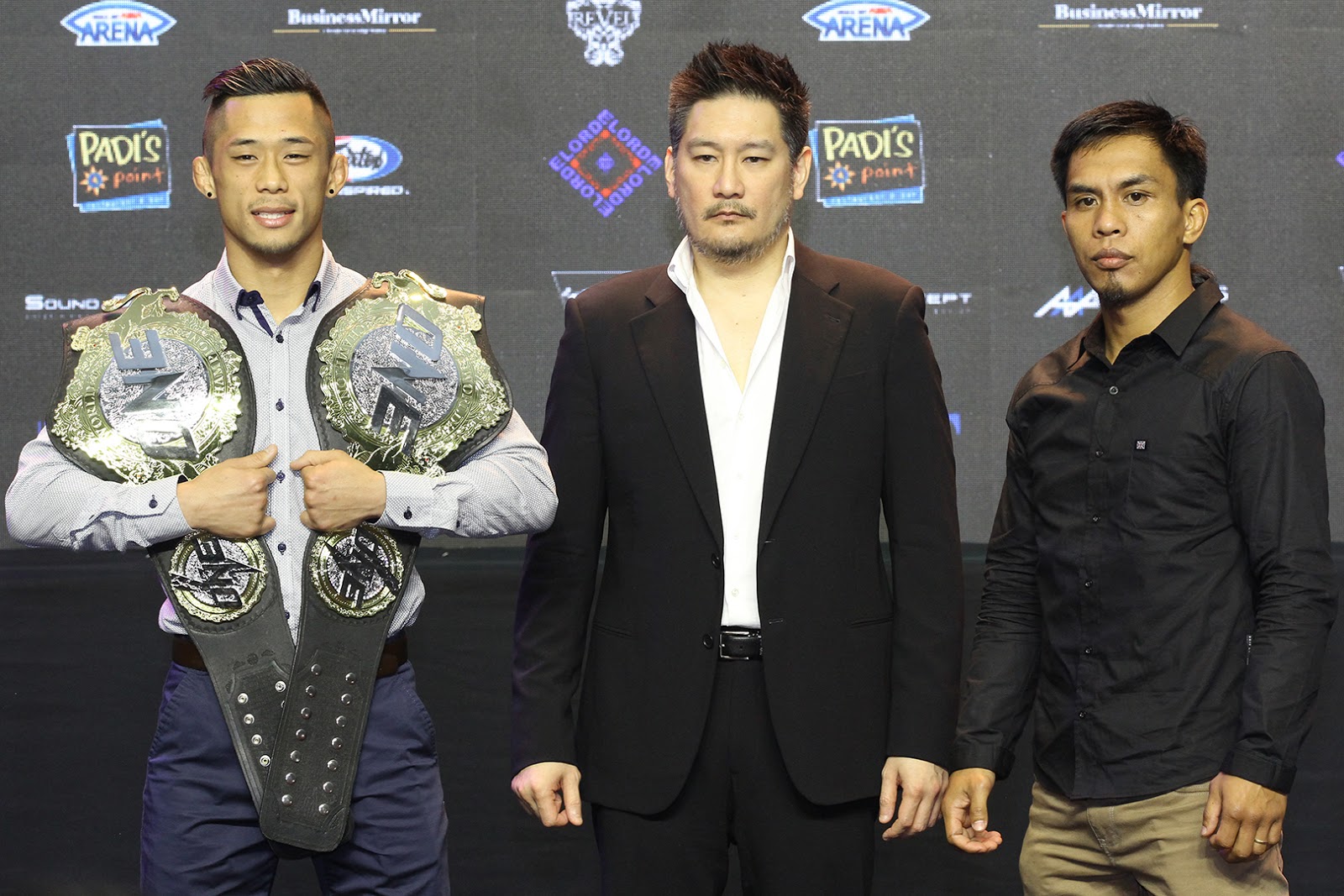 24 July 2018 – Manila, Philippines: The largest global sports media property in Asian history, ONE Championship™ (ONE), held the ONE: REIGN OF KINGS Official Kick-Off Press Conference today, 24 July at the City of Dreams Manila.

For photos of the ONE: REIGN OF KINGS Official Kick-Off Press Conference, click here: https://drive.google.com/drive/folders/1bRqa8GFr8pVUMzgyg7efmnm9AMEf10yj?usp=sharing

Gracing the press conference with their presence were ONE Championship Chairman and CEO, Mr. Chatri Sityodtong, as well as a handful of ONE Championship superstars ready to ignite the Mall of Asia Arena with action and excitement.

Top bantamweight contender Kevin “The Silencer” Belingon (18-5) of Baguio City, Philippines will go head-to-head with reigning ONE Featherweight & Lightweight World Champion Martin “The Situ-Asian” Nguyen (11-2) of Sydney, Australia in a highly-anticipated showdown for the ONE Interim Bantamweight World Championship. The two superstars both pack incredible power in each of their fists and will look to put on a show in Manila.

Also on the card are co-main event participants, former ONE Lightweight World Champion Shinya “Tobikan Judan”  Aoki (40-8, 1NC) of Tokyo, Japan and Shannon “OneShin” Wiratchai (9-2) of Bangkok, Thailand, who will do battle for lightweight supremacy.

Here are some quotes taken from the press conference:

Chatri Sityodtong, Chairman and CEO of ONE Championship:

“ONE Championship is going all-out in the second half of 2018, and we always have something special planned for Manila. In what is perhaps the biggest martial arts spectacle ever held in the Philippines, we have an amazing evening planned for everyone this Friday night. The Mall of Asia Arena will be rocking with action and excitement, delivered by the absolute best in local and international martial arts talent.”

“Kevin Belingon and Martin Nguyen are ready to put on a show. This matchup gives me goosebumps and I know everyone is excited to see how it unfolds. When you put two aggressive and explosive strikers in the cage together, it is sure to produce fireworks. You literally cannot blink when these two guys finally meet at the center of the ONE cage. Given how both are incredible finishers, I don’t expect this bout to go the distance. Bibiano Fernandes is lying in wait, and the winner of this bout goes on to unify the bantamweight world titles!”

“In addition, we have a special treat for all the fans in Manila, as world-famous and legendary martial arts icon Renzo Gracie will be showcasing his talent for the final time in his career against Japanese veteran Yuki Kondo. I have known Renzo for a long time and it is an absolute honor and privilege to give them the stage for which he can perform once again and do what he loves to do in front of the entire world. We are ready to make history once again this Friday night at ONE: REIGN OF KINGS. See you all there!”

“As purveyor of digital lifestyle, we have redefined how Filipinos can enjoy their entertainment whether in music, movies, esports and live shows. We have partnered with global content brands to bring world-class content to every device be it through mobile or at home. Today, we are redefining sports entertainment by partnering with ONE Championship, not only for Filipinos to enjoy professional mixed martial arts, but to also cheer for our Filipino fighters competing for the flag.”

“This is without a doubt the biggest bout of my career. Everything that I have worked on to this point, all the countless nights spent in the gym, endless rolls with my teammates at Team Lakay, all the wins and the sacrifices, it all comes down to this. I took this challenge against Martin Nguyen, despite having a guaranteed shot at Bibiano Fernandes already, because I wanted to prove that I never back down from any challenge no matter how big or small. Beating Martin will be huge for my career. He is a two-division world champion at both featherweight and lightweight. If I defeat him, I just beat a two-division world champion. Think about that for a second. I am excited to get into the cage this Friday night and do what I do best.”

“Mad respect to Kevin Belingon for accepting this challenge. He didn’t have to, but he did. And that just speaks volume of the kind of warrior this guy is. I have complete and total respect for a martial artist with his values and principles. In a huge way, I see a lot of similarities between us. We are both hungry, and we are both determined for victory. I have worked extremely hard for this matchup and I am set on my goal, which is the ONE Bantamweight World Championship and to become a three-division world champion and make history. Nothing can stop me from achieving that goal. I feel that this is my time.”

“I live to compete, it is my life’s passion. Being able to test my skills against the very best in the world, it’s what I was born to do. I can see myself doing this until I am old. Shannon Wiratchai is a good fighter, he has very good striking skills. But I have faced every kind of fighter in my career, and I have seen everything there is to see inside the cage. When I step back in there, I expect to impose my will on my opponent and get the victory that I have trained very hard for.”

“Shinya Aoki is a great legend and he is my idol. I have watched and followed his career for the past 15 years. He is the reason I got into mixed martial arts and started to become an athlete in the first place. To be able to share the cage with him is a huge privilege for me. As such, he deserves nothing but my best. I am prepared to give him the greatest performance of my life. I hope one day I can inspire other people with my performance, just as he inspired me. Can’t wait for this Friday night when I am able to live my dream of competing against Shinya.”

“To be able to come back after all these years and do this again, it seems surreal to me. But I have been preparing a long time for this. I would like to thank Chatri Sityodtong and ONE Championship for the opportunity, for giving me the global stage once again, and for allowing me to satisfy my craving for competition. This one is for the fans.”

“This bout has been brewing for a long time. All I can say is that I have much respect for Renzo Gracie and what he has brought to martial arts. I am fully prepared to win this bout however, and I am completely focused on giving a great performance this Friday night. Fans can expect an action-packed bout between us two. Thank you for the opportunity, ONE Championship.”

“The ONE lightweight division is incredibly deep and with lots of talent. Getting to the top is very hard, but once you are there, it’s a great feeling. I am determined to get back to the top. I can face every opponent, whether they are undefeated or not. I am willing to go in there and go to work. I am working very hard on improving all aspects of my game with my teammates at Team Lakay. Every victory brings me closer to the title again. This time is no different. I will defeat Aziz Pahrudinov and make my way back to the top.”

“I am grateful for the opportunity to be making my ONE Championship debut this Friday night. ONE Championship is the best in Asian martial arts, and I am excited to be a part of it. I am sure this will do wonderful things for my career. Facing a veteran and a former champion in Eduard Folayang in my debut is a tough challenge, but I have prepared very well for this bout and I will leave the arena as the winner.”