Marvin Vettori used the same game plan that Derek Brunson used last month to defeat Kevin Holland. While Vettori was cautious enough when trading with Kevin Holland on his feet, the ‘Trailblazer’ had no answer for him when he was taken down to the ground. 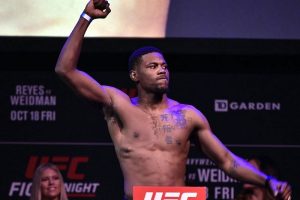 Vettori wrestled his way towards a unanimous decision victory.

Kevin Holland to train with Daniel Cormier at AKA

After the fight, Kevin Holland appeared in an interview with Megan Olivi where he talked about his performance and also revealed that he will be travelling to San Jose to train under former UFC champion Daniel Cormier at American Kickboxing Academy.

“Like [Daniel Cormier] said, gave up a lot of takedowns in the last two fights,” he said in a post-fight interview with Megan Olivi. “It sucks not to be in the winner’s circle. But at the end of the day I got a plane ride home and going to spend a lotta dollars at the lady’s club, so … it’s not that bad.”

“When I seen Marvin didn’t have an opponent, the smart thing to do would’ve been staying in that shower and not answering the phone call,” he added. “But I never said I was smart. Courageous and a company man is something that I am. So if people want to ridicule that, they can ridicule that. But at the end of the day, when they needed somebody to step in, I stepped in.

“I fought seven times since the pandemic. I’m gonna go spend a couple days with the kid, and then we’ll get back to it. It’s nothing to a sniper. Sometimes we miss the shot, sometimes we land the shot. I’m not the only one who lost tonight, but I’m the only one that did five rounds and didn’t get finished in either one. Against elite levels guys each time, you know?”

“Can’t say too much changes,” he said. “We’ll see, I honestly don’t know. Go spend some time with DC [Daniel Cormier], for sure, work on some of that wrestling. Go work on wrestling, learn to stop some of these takedowns. Other than that, same old same.”

“I’m not gonna change the fighter I am and try and become a wrestler just cuz these guys wanna wrestle. I like to strike, I like to bang. I just do a better job at keeping the fight on the feet and deliver some more knockouts to the people and that way they’ll be back on the bandwagon, sooner or later.” (H/ T – MMAMania.com)

Previous articleDarren Till says he would have hurt Marvin Vettori for five rounds if they fought at UFC Vegas 23
Next articleConor McGregor says fight with ‘Inbred Hillbilly’ Dustin Poirier is OFF !!