A mouth-watering clash featuring top lightweight contender Kevin Lee and Al Iaquinta is set for UFC on Fox 31 at the Fiserv Forum in Milwaukee this weekend.

This fight is a rematch of their first fight which took place back in 2014 at UFC 169, a fight which Al Iaquinta beat Lee via unanimous decision. However, Kevin Lee is a whole another animal now and back then he fought Al in his UFC debut. Although he has n herculean task ahead, it hasn’t stopped him from voicing his opinion about other fighters in the division. 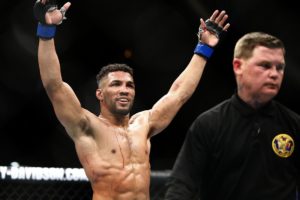 Recently, Kevin Lee was giving names of the contender in the lightweight division and according to Lee, he doesn’t consider Dustin Poirier a serious contender.

“Dustin, to me, is not a serious competitor in this division.”

Although there are rumours about Conor McGregor having a potential rematch with Poirier, Kevin Lee shakes his head about the match-up.

“If Conor’s going to take a step backwards and fight a man he already knocked out in the first round at 145 (pounds) – if he needs that steps back to get himself feeling good again so that they can try and make some more money off him, then that’s on him,” Lee said.

“But I put Poirier in another category. He’s in the more ‘fun fight’ category with Nate Diaz and some of these older guys that are just out there to have fun. I’m out here chasing titles.”

Do you guys agree with what Kevin Lee has to say about Poirier?