Winning six of his last eight bouts, Nurmagomedov walked in as a heavy favorite. Zawada on the other hand, being 0-2 under the UFC banner had his back against the wall. 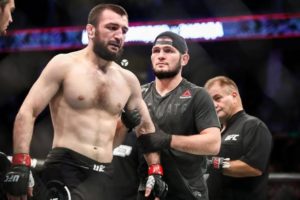 Expectedly being associated with the Nurmagomedov clan, Abubakar wasted no time in getting the fight to the ground. Zawada being a BJJ black belt was quick to latch on a triangle choke. Abubakar did well to defend it before Zawada switched to a armbar, eventually switching back to triangle choke again leading Abubakar to tap.

With undefeated lightweight king Khabib Nurmagomedov in his corner in his own hometown, the defeat was indeed disappointing. Khabib took to social media to console his cousin brother. (via Instagram):

Abubakar will have to go back to drawing board.

Previous articleTwitter explodes as KSI vs Logan Paul 2 is mired in controversy
Next articleWatch: Tyson Fury works on knees, elbows and sprawling with UFC middleweight star Darren Till