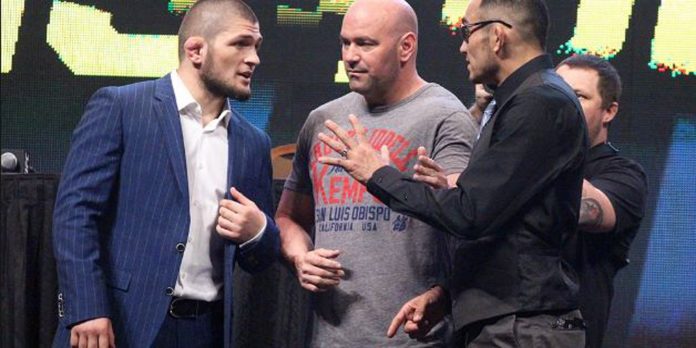 There have been a lot of fireworks going on between the UFC interim lightweight champion, Tony Ferguson and undefeated top contender Khabib Nurmagomedov. The pair will soon enter the cage to fight each other but the verbal battle between them has been going on for quite some time now. Some interesting words were exchanged between them even during the recently conducted UFC 223 conference call. Below is a particularly interesting excerpt in which “The Eagle” has claimed that he will knock “El Cucuy” down with a left hook and will then choke him out via a D’arce choke.

Khabib Nurmagomedov: “I’m going to give him a very strong left hook — left hook, he goes down and then I choke him.”

Tony Ferguson: “So a rear-naked choke, that’s what he’s thinking? I’ve got something planned for your ass.”

[As a] fighter, of course I do not underestimate him. I respect him as a fighter. He has very good skills. When I’m preparing I think it’s gonna be the hardest fight of my life, this is what I’m thinking,

This is an MMA fight. This is not grappling or striking — this is an MMA fight. We have a plan and we’ve worked on this. When the cage door closes I’m going to listen to my coaches, my corners and follow my plan,” he said. “This is why this fight is so interesting because nobody knows what’s going to happen.

All my life, nobody make me tap — nobody. At amateur, training…it doesn’t matter…I never get tired and I never tap.”

Previous articleUFC: Joe Rogan and Yves Edwards disapprove of Frankie Edgar fighting so soon again
Next articleUFC:Leon Edwards shares his desire for a ranked opponent,his respectfull call out of Jorge Masvidal and his thoughts on Till vs Thompson