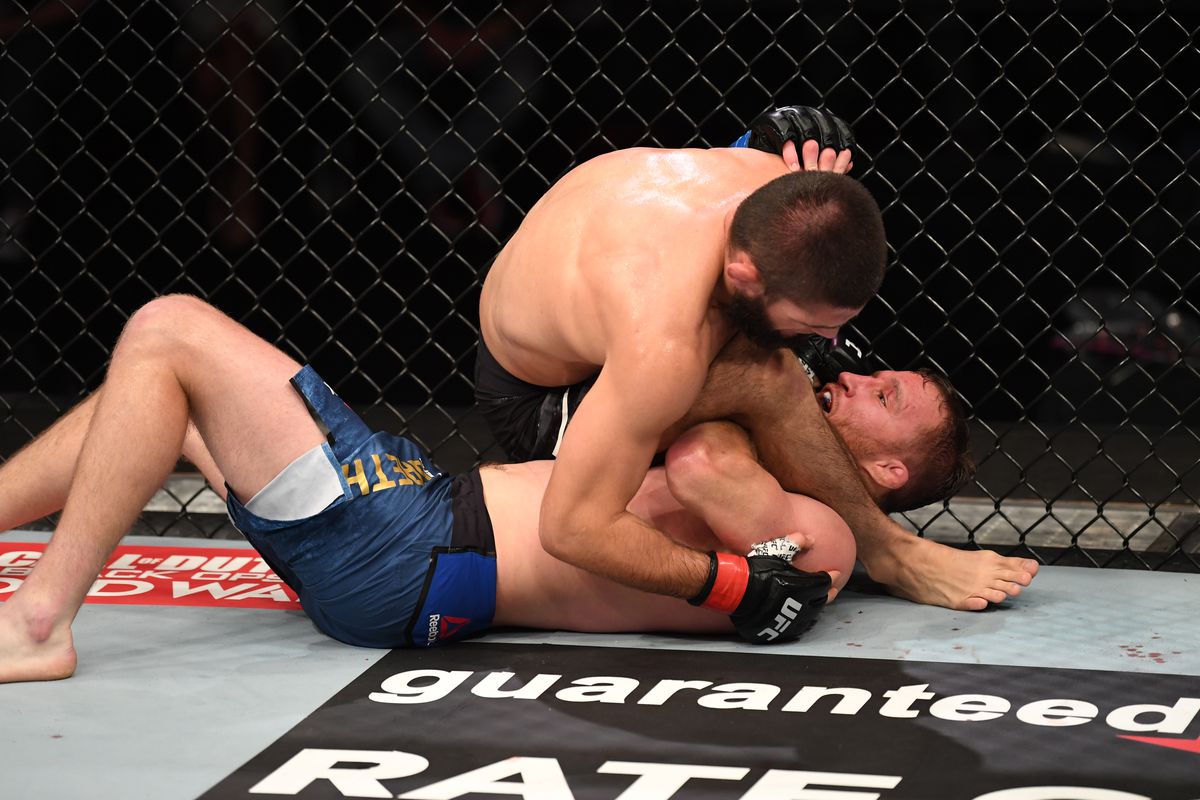 2020 has been a wild year for the MMA. The ongoing Coronavirus pandemic wreaked havoc around the world and has forced businesses to close and affected the livelihood of many people.

In the year 2020, MMA fans got to see some amazing submissions and fight-ending sequences. A global pandemic wasn’t enough to stop the world’s mixed martial artists from slamming into one another and doing unfortunate things to each other’s limbs, and their brave efforts produced several terrific tapouts.

Here are some of the best submissions from 2020:

A.) Khabib Nurmagomedov vs Justin Gaethje

After a brutal year that saw him lose his father and see a high-profile fight scrapped by the COVID-19 pandemic, Khabib Nurmagomedov could finally exhale, as the UFC lightweight champion successfully defended his title with a second-round submission of Justin Gaethje. 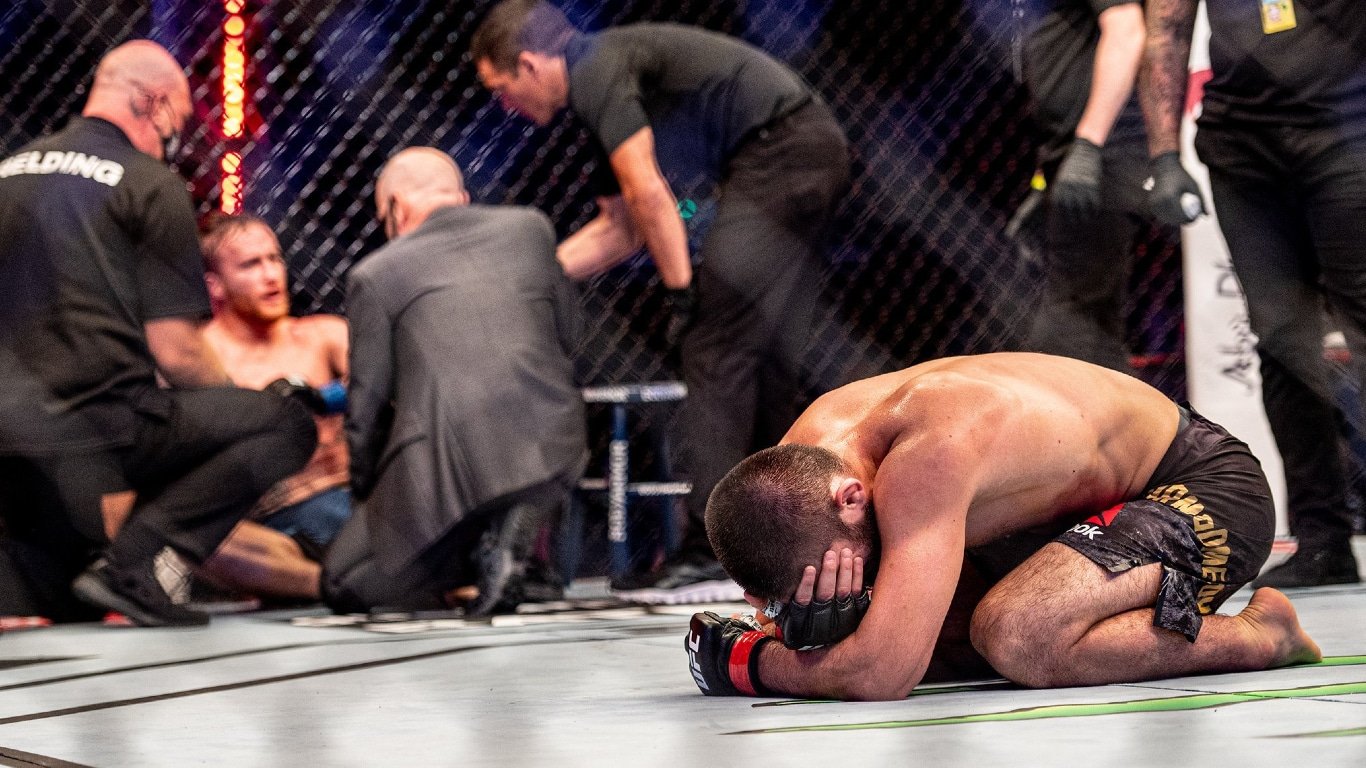 But his victory in the UFC 254 main event on Fight Island in Abu Dhabi, one which lifted his perfect record to 29-0, was followed by a shocking announcement, as he announced his retirement at the age of 32.

After a brief feeling-out process, a fight broke out, with Numagomedov looking to close the distance while Gaethje landed some solid shots before getting out of grappling range. Nurmagomedov kept the pressure on, landing knees, kicks, and punches. With a little over a minute to go, Gaethje scored with a hard combination, but moments later, Nurmagomedov had his takedown with 40 seconds left. The champion quickly moved into the mount position and almost caught his foe’s arm, but the horn intervened.

Gaethje focused on kicking Nurmagomedov’s leg early in round two, but Nurmagomedov responded with a fast takedown and an even faster move to the mount, where he locked in the triangle choke that ended the bout at 1:34 of the second stanza.

B.) Mackenzie Dern vs Hannah Cifers

Mackenzie Dern got a spirited effort out of Hannah Cifers in the main card opener, but once Dern got her hands on her opponent on the canvas, it was no surprise that a first-round submission victory followed for the strawweight up and comer.

Cifers went on the attack immediately, bulling Dern into the fence where she scored with knees and punches. Dern got free and showed off some fast hands before the fight hit the mat in the third minute, and once there, it was Dern’s world. Moments later, Dern had a kneebar and Cifers tapped. The official time of the finish was 2:36 of round one. 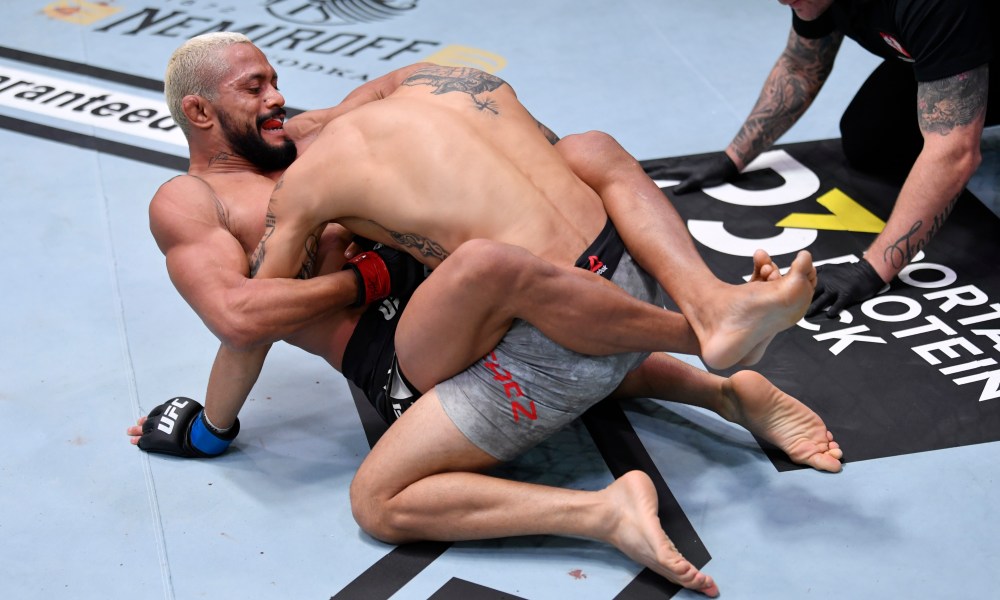 Flyweight champ Deiveson Figueiredo just defeated Alex Perez in under two minutes at UFC 255, finishing the fight without taking any damage. One of the quickest wins in championship fights in the MMA world.

The fight was very fast-paced action where both of them started landing shots and covered the distance pretty quickly and then the moment the fight got to the ground we say Figueiredo just taking over from there. Alex tried to scramble to get back on the top but was unsuccessful and instead gave up his neck and Deiveson was able to lock up a tight guillotine choke finishing Alex under two minutes. 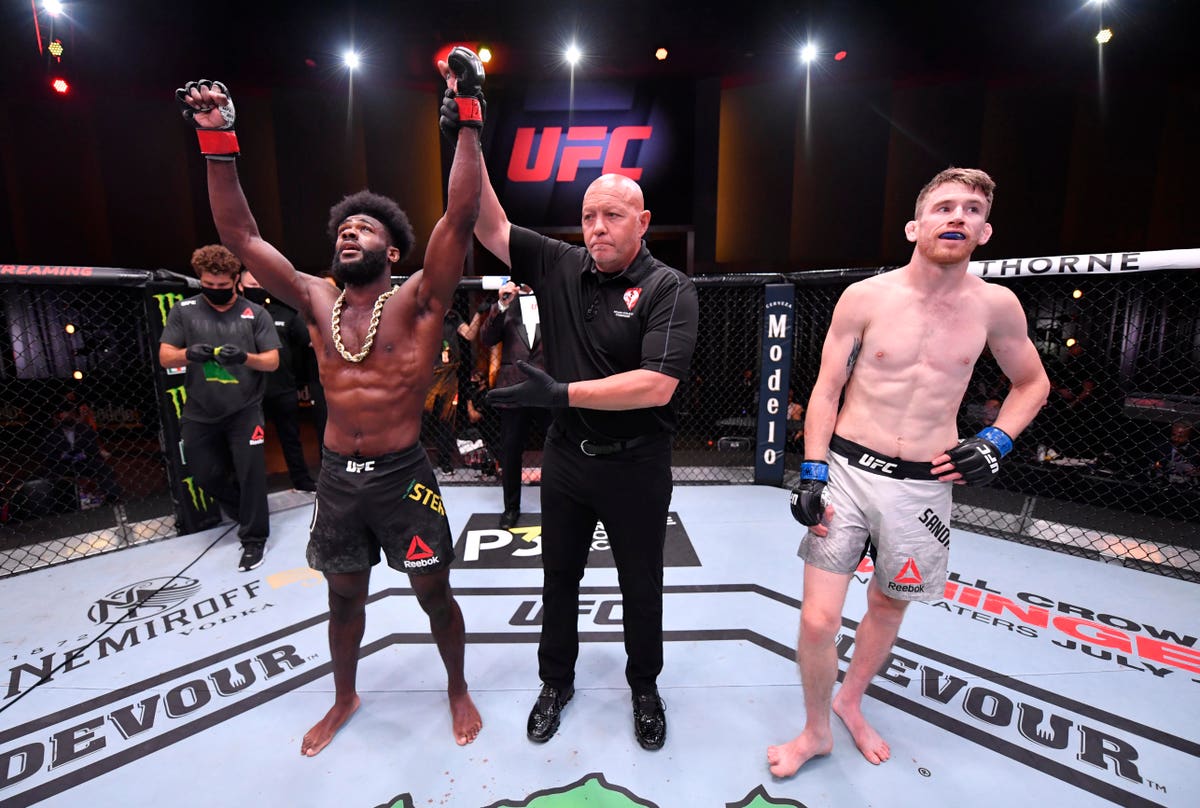 Aljamain Sterling left no doubt in making his case for a shot at the bantamweight title, as he spectacularly finished Cory Sandhagen, ending the bout via submission in the first round.

Sterling tore after Sandhagen as the fight began and quickly got him to the mat and took his back. The New Yorker’s first rear-naked choke attempt didn’t hit the mark, but the second did, with the end coming at 1:28 of round one.

The Winner of the Submission of the year 2020 :

UFC lightweight champion Khabib Nurmagomedov had every reason not to be at his best when defending his title against Justin Gaethje at UFC 254.

The tragic loss of his father Abdulmanap undoubtedly left Nurmagomedov in a shaken state as he prepared to make his return. The loss of a parent is hard enough, but Nurmagomedov and his dad shared an even deeper bond than just father and son – Abdulmanap had also been his coach since the first day he strapped on a singlet and decided to test himself on the mats. 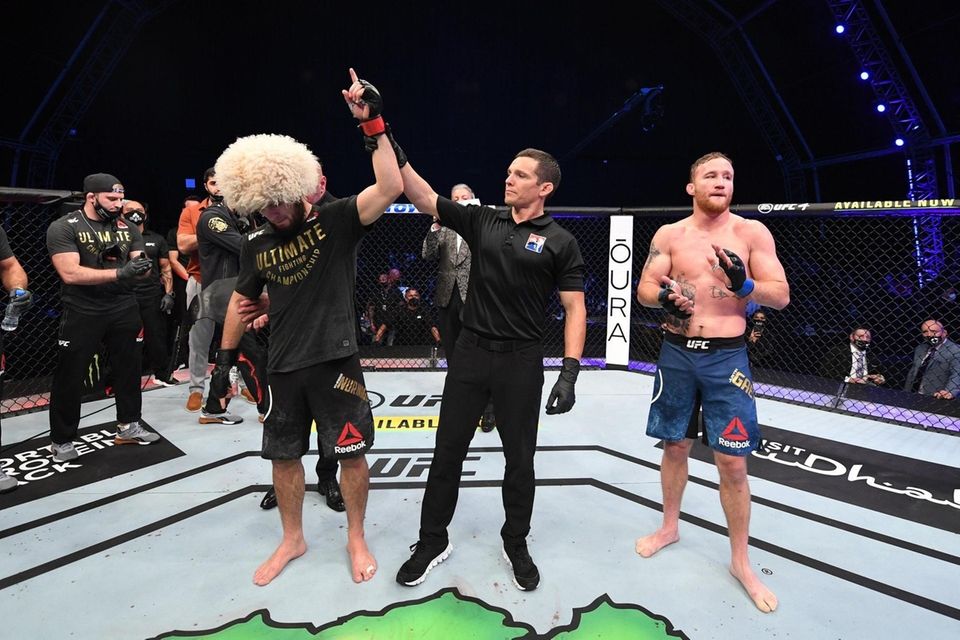 When the first round got underway, Nurmagomedov didn’t seem all that interested in employing his suffocating ground game, which is predominantly how he remained undefeated through the first 28 fights of his career. Instead, Nurmagomedov started walking down Gaethje, which seemed like a colossally bad idea at the time, given the sheer amount of damage the former World Series of Fighting champion dished out every time he competed.

While Nurmagomedov found success on his feet against Gaethje, he opted to rely on his ground game in the second round as he brought the fight to the floor. Rather than punish Gaethje with strikes, he decided to test out his submission arsenal, first setting up an armbar before falling into a perfectly timed triangle choke.

Once Nurmagomedov had the submission wrapped up, Gaethje was stuck with no place to go, and the fight came to an end at 1:11 into the second round.