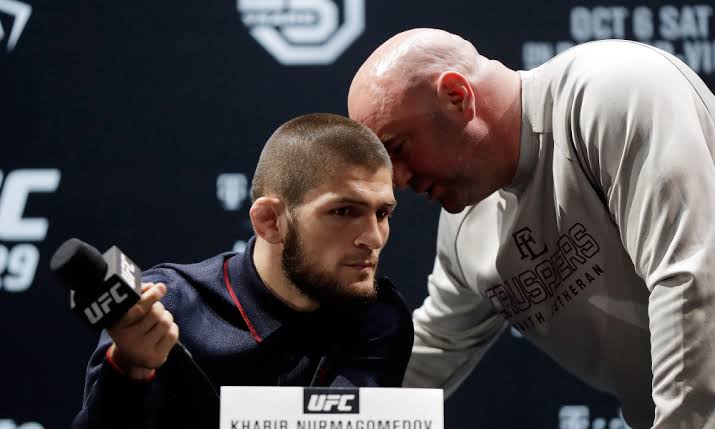 UFC lightweight champion Khabib Nurmagomedov made headlines when he declared that he would leave UFC if they fired his teammate Zubaira Tukhugov.

Khabib Nurmagomedov wrote on Instagram “If you decide to fire him, you should know that you’ll lose me too”.

“We worked it out. We’re gonna get everything worked out. Obviously, he was a little upset and a little fired up.”

Dana White continued, “Listen, guys get very emotional man and that was a very emotional fight for him. At the end of the day, Khabib is a great guy and we’ve always had a great relationship with him.”
The reporter also asked Dana White, “Does this mean Khabib and Zubaira will remain on the UFC roster?”
To which Dana White replied, “Well, Khabib is staying in the UFC,”. Also saying that he is not 100% sure about the future of Zubaira in UFC.
He just assured that the lightweight champion Khabib Nurmagomedov is happy and everything will work out.

Previous articleScary looking bodybuilder in line for MMA debut. How long before he gasses out?
Next articleKhabib calls out Floyd Mayweather. Floyd willing to fight. Khabib says ‘Not in Vegas’