Khabib Nurmagomedov has helped these addicts by covering their treatment costs and with motivational speaking.

Makhachkala based MMA fighter Magomedzaid Zaidov, who is also friends with UFC Champion Khabib Nurmagomedov revealed the details of how the UFC superstar is helping the addicts rehabilitate. 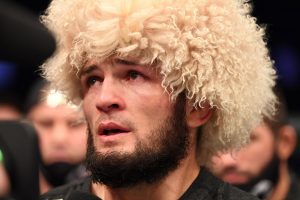 Speaking to Sports Express, Zaidov revealed that he runs a rehabilitation center and how big of a help Khabib Nurmagomedov has been.

“Khabib himself is very closely involved in the process of helping (drug addicts). I helped a lot of people. 50 people whom he helped to rehabilitate. And he helps them financially, and they are such difficult people who need some kind of authoritative person who would turn to him and motivate him,” Zaidov said of Khabib Nurmagomedov.

“Khabib devoted his time, came, paid attention, talked to them. It is even worth more than financial assistance. Financial aid, when it is unnecessary, it is like a ransom. And the attention that a person pays is worth a lot. Khabib helped a lot with this, the guys from the region, with whom he grew up.”

Will Khabib Nurmagomedov return to the sport?

Khabib Nurmagomedov retired from the sport of MMA after defeating Justin Gaethje at UFC 254 in Abu Dhabi. Khabib lost his father to covid-19 last year and as a result, he promised his mother that he will never fight again.

However, UFC president Dana White has said on numerous occasions that he isn’t ready to give up on Khabib and vowed to make the Dagestani return to the Octagon.

Khabib retired from the sport with a professional record of 30-0.

Do you guys think Khabib Nurmagomedov will return to the sport of MMA? Let us know in the comments section below.

Previous articleUFC Fight Night: Rozenstruik vs. Gane
Next articleDustin Poirier wants to fight Nate Diaz at welterweight in near future