UFC lightweight champion Khabib Nurmagomedov after announcing his retirement at UFC 254 has now hinted that he might consider returning to the octagon.

In his post-fight interview with UFC commentator Jon Anik, the undefeated Russian explained that he’d promised his mother his fight with Gaethje would be his last, citing the death of his father and mentor Abdulmanap as the reason.

“This was my last fight,” a visibly emotional Khabib said.

“I promised [my mother], it’s going to be my last fight,” Nurmagomedov added. “It was my last fight here. Tuesday, you guys have to put me No. 1 pound-for-pound because I deserve this.”

“Today’s my last fight in the UFC.”

Ever since Khabib Nurmagomedov retired from the UFC, there have been various theories on if he would make a comeback. Dana White has always been positive about a comeback from the lightweight champ. While Khabib dismissed those speculations last week, he seems to have changed his stand on social media. 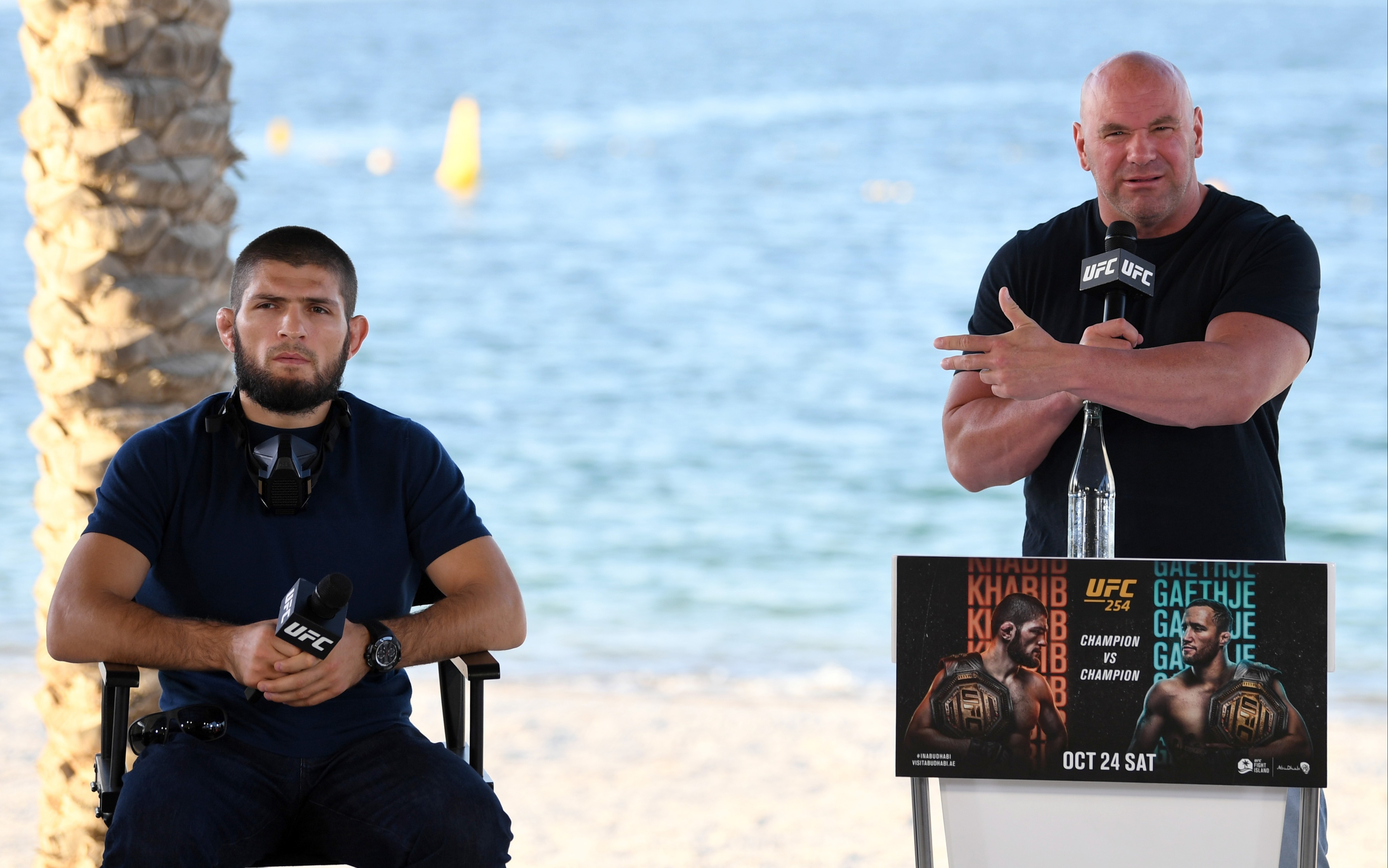 At the post-event presser of UFC 255, Dana White was asked about the future of the Lightweight title, which is obscure since the evident departure of Khabib Nurmagomedov. White, though himself is the testament of all the developments around the other top contenders, yet has maintained his opinion that “Khabib gonna fight.” And until he is in the circuit any decision on the title front would be a hasty decision.

Contrary to White’s belief Khabib has reiterated several times that he does not intend to come back now. Moreover, in a recent ceremony, he has put an exclamation mark of sorts on any speculation about his return. However, the UFC president is still holding his ground and during the press, he said Khabib and him are going to meet soon. In lines with that Khabib has seemingly responded.

The Eagle’ posted a message on Instagram with an image of Dana White and himself from the pre-fight press conference of UFC 254. However, it was the caption of the image that has piqued the interest of fans. The 155-pounds champ captioned the image, “See you soon”. Thus, fans are wondering if this is a sign that Khabib has changed his mind regarding retirement.

Khabib Nurmagomedov had plans for retirement

Recently while talking about the same with RT Sport, Khabib Nurmagomedov said that he has the power to fight till 40 but that’s not his goal. He claimed he wanted to retire after reaching the summit and he did exactly that. Khabib Nurmagomedov mauled every opponent he faced in the UFC octagon, which includes top-ranked fighters like Conor McGregor, Dustin Poirier, Justin Gaethje, and others. In his entire career, he lost a maximum of two rounds, retiring with an undefeated record of 29-0.

While talking about his future, Khabib Nurmagomedov claimed that he wants to “do a master’s course” and dedicate more time to studying. “I’ve bought sheep, I tend to my farm. I’d like to develop in this field a little. I have the bull calves out to feed, I have cows,” he added.

But now it looks like Khabib Numagomedov has changed his mind and maybe is eying to return to the throne which is rightfully his.

What do you guys think will Khabib Return?