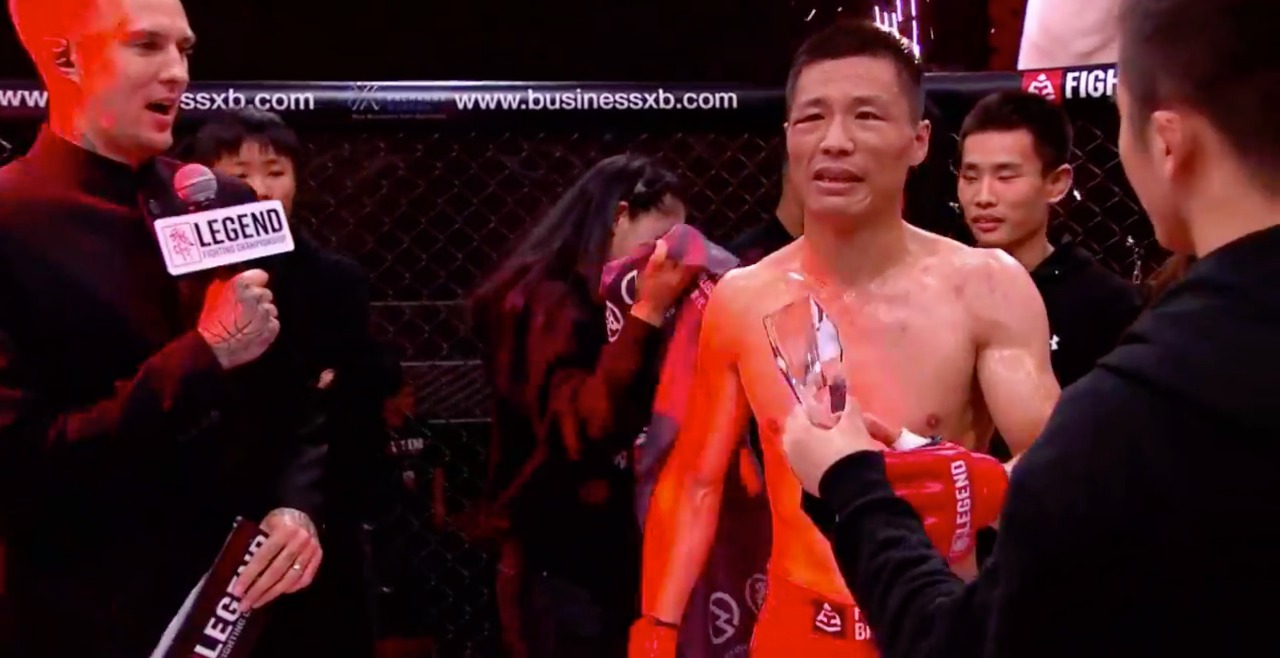 After a successful return at the MGM Theater in September 2019, the pioneer of Mixed Martial Arts (MMA) in China, Legend Fighting Championship returns to close out the year with a highly anticipated fight card!

In the co-main event, ’Super Mom’ Miao Jie brings an unparalleled ground game into the Legend FC ‘Bafang’ for the 1st time against rising star Liu Jie. This is classic grappler v striker bout. Miao Jie is the only Chinese female to earn black belts in both Judo and Brazilian Jiu-Jitsu (BJJ), whilst Liu Jie, boasts a renowned boxing-based technique. 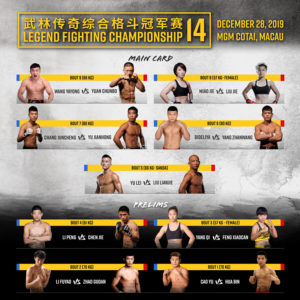 Be there to experience this spectacular night of live-action!

In the first fight of the main card, Yu Lei takes on Liu Luanjie in a Sanda match. Sanda or better known as Sanshou is a Chinese kickboxing or boxing match. It was designed by the Chinese Army taking inspiration from Kung Fu.

ROUND 1: The fight starts with both fighters touching gloves. The spinning kick missed for Liu. Nice head kick by Liu. Now a spinning back kick landed by both fighters.

Two high thrown by Yu Lei but fails to connect. Straight right missed for Yu. Head kick landed for Yu with 40 seconds remaining on the clock.

ROUND 2: Overhand right followed by a spinning leg kick landed for the Liu. Not much happening in the second round. But Liu having the upper edge in this round.

Yu isn’t able to find his range in this fight so far. Another spinning leg kick missed for Liu.  Now a jab landed for Liu and now Yu is bleeding.

Uppercut missed for Yu and then Liu follows it up with a leg kick.

ROUND 3: Leg kick missed for Yu and now a takedown attempt for Liu and an overhand right lands for Yu.

Liu Lianjie is extremely light on his feet and is cutting the Octagon well and now he lands a spinning back fist on Yu’s jaw. Yu follows up with a barrage of punches, but neither lands on target.

ROUND 1: Big punches traded early on. Bideliya is landing big knees and landing hard shots and has now pushed Yang back to the cage. Bideliya with heavy ground and pound and now is on a full mount and he is raining barrage of punches on Yang and now the referee steps in to stop the fight with 2:30 seconds remaining on the clock.

RESULT: Bideliya knocks out Yang Zhanwang in the first round.

ROUND 1: Chang landing rangy punches on Yu. Now Yu has Chang trapped against the cage. A jab followed by a kick for Yu. Both fighters swinging wild punches.

Yu’s eyes have already swollen up. Yu lands a kick t the head and now Chang follows up with a lovely 1,2.

ROUND 2: Head kick lands for Chang and now Yu follows up with a low kick. Yu lands a hard overhand right which threw Chang off balance. Yu goes for a spinning back kick, but he misses by a wide mile.

ROUND 3:Both fighters open the round with inside low kicks. Spinning back fist from Yu cleanly lands on Chang and drops him. Chang looks hurt. Yu lands a huge kick to the groin of Chang and he is visibly wincing in pain. The referee has now paused the fight.

Chang is now marching forward in the last minute as he is landing heavy shots and pushing Yu back. He makes a comeback at the end of the round.

ROUND 1: Miao lands a jab on Liu and then successfully manages to take her down via single-leg takedown.  Miao now goes for bodylock triangle and then submits Liu via an armbar in the first round.

RESULT: Miao Jie vs. Liu Jie via armbar in the first round.

ROUND 1: Wang successfully executes a double leg takedown. Now Yuan goes for the triangle but is not successful. Now both fighters on their feet. Wang then lands a hard right hook and then executes a body lock takedown.

ROUND 2: Lovely combination landed for Wang and then Yuan follows up with a kick. Wang with another single-leg takedown.

ROUND 3: Wang lands crushing overhand right on Yuan. A low kick throws Wang off-balance. But Wang continues his relentless kicking but his leg is swollen from all the kicks Yuan has landed.

Wang with an another double leg takedowns and now a spinning leg kick from Wang grazes the chin of Yuan.

Previous articleMary Kom defeats Nikhat Zareen to book Tokyo 2020 berth – and refuses to shake hands after the fight!
Next articleManager tells fans to be excited for the return of the ‘old Conor McGregor’ in 2020