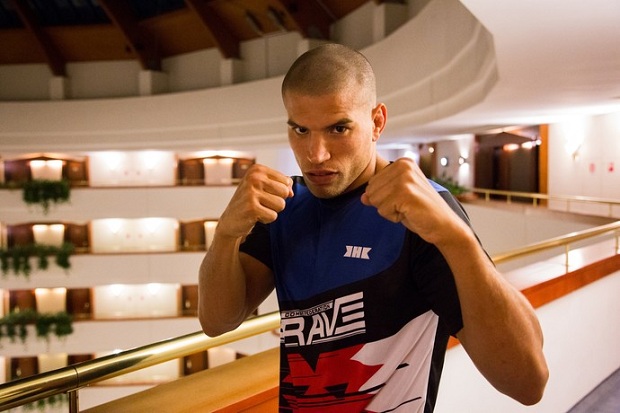 Brazilian MMA has found a new home with Brave Combat Federation, who counts on two local fighters as world champions currently –  Klidson de Abreu at Light Heavyweight and Lucas “Mineiro” Martins as interim Lightweight titleholder. Welterweight Leonardo “Macarrão” Mafra is looking to continue that tradition with a trademark victory over Gadzhimusa Gaziev at Brave 12, set for May 11th, in Jakarta, Indonesia.

A former UFC fighter, “Macarrão” will be the sole Brazilian in the stellar fight card for Brave’s debut in Southeast Asia and signals that a victory over Gaziev will propel him into the height of the division.
“I’m very excited for my Brave debut. I know it won’t be an easy fight, I’ve never had one in my entire career. But I want to make sure I put on a great performance and represent my country and my countrymen in the best way possible. I want to make sure Brazilian Brave fans tuning in to my fight have a lot to celebrate after I’m done with Gaziev. I’m going in there with all I have to put on an amazing performance. I’m ready to represent Brazil and start a great career at Brave”, says Mafra, who was supposed to make his promotional debut back at Brave 6.
“I was frustrated after my opponent at Brave 6 didn’t make weight and I didn’t fight. But I wanted another opportunity to show my skills for Brave and I’m very happy and focused on making sure I get a win against Gaziev”.
Mafra, who fights out of Kings MMA with legendary coach Rafael Cordeiro, admits he didn’t study Gaziev, but says he knows his opponent’s style and is ready to rise above him at Brave 12.
“Like I said before, I’ve never had an easy fight and I know he’s a great athlete, but so am I. Granted, I didn’t study him, but we went through his style of fighting. I’ve always had in mind that if I can impose my style during a fight, I’m able to beat everyone, and that’s the mindset I’ll carry on to the Brave cage on May 11th“, guarantees “Macarrão”, who’s got great expectations for the promotion’s debut in Indonesia.
“Brave Combat Federation is the global promotion that elevated athletes into global superstars and contributed to the growth of the sport regionally and Internationally. The event will make a huge difference in Indonesia”.
Brave 12: KHK Legacy full fight card:
Lightweight: Eldar Eldarov (Russia) vs. Brian Hooi (Netherlands)
Welterweight: Tahar Hadbi (Algeria) vs. Jarrah Al Selawe (Jordan)
Welterweight: Mehdi Baghdad (France) vs Pawel Kielek (Poland)
Light Heavyweight: Vincent Majid (Indonesia) vs. Jing Yi Chong (Malaysia)
Featherweight: Hamza Kooheji (Bahrain) vs. Khaled Taha (Germany)
Featherweight Marat Magomedov (Russia) vs. Luke Adams (USA)
Catchweight: Gadzhimusa Gaziev (Russia) vs. Leonardo Mafra (Brazil)
Lightweight: Hardeep Rai (UK) vs. John Brewin (New Zealand)
Catchweight: Jeremy Pacatiw (Philippines) vs. Kaan Ofli (Australia)
Flyweight: Hussain Ayyad (Bahrain) vs. Jomar Pa-ac (Philippines)
Bantamweight: Gamzat Magomedov (Russia) vs. Zeck Lange (USA)