At the age of 39, on a four fight losing streak including three brutal knockout losses, perrenial light heavyweight contender Jimi Manuwa had to take a call. 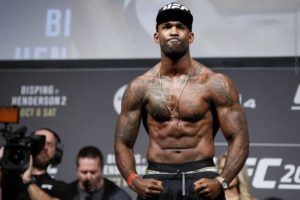 Rightfully so, Manuwa decided to hang up his gloves after a brutal head kick knockout against Alexander Rakic in June 2019. However it seems the time off has actually rejuvenated the London native as he teases a comeback. Manuwa tweeted:

“All this time off has made me realise I’m that I was truly born for this game !”

Back in 2017, Manuwa was floating around top 5 of the LHW division with a two-fight knockout streak. Manuwa’s only two losses back then were against elites in Alexander Gustafsson and Anthony Johnson. However was reduced to a four fight losing streak ever since.

However to his defense, the four losses were against top competition in former title challengers Volkan Ozdemir and Thiago Santos and contenders in Jan Blachowicz and Rakic.

Manuwa certainly has a heap of options for his comeback.

Previous articleUFC: Leon Edwards blasts ‘WWE style’ coverage of altercation between Kamaru Usman and Jorge Masvidal
Next articleWhat Asha Roka can do to change things up after loss to Gina Iniong