UFC lightweight fighter Roman Bogatov was released by UFC after he landed multiple illegal strikes in his fight against Leonardo Santos at UFC 251 in Abu Dhabi.

During his fight with Leonardo Santos, Bogatov never looked comfortable and was landing some illegal blows at regular intervals. The illegal strikes include recurring groin shots and illegal knees. A third illegal blow hit Santos in the head, and at that point referee, Marc Goddard issued a rare two-point reduction. 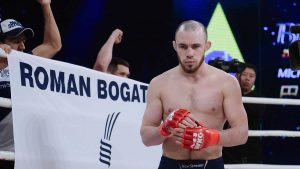 Roman Bogatov’s short career with the UFC came to an end after he fought in one of the most foul-filled fights. All those illegal shots that he landed in the fight with Santos cost him the fight which he lost via decision and later on cost him his one fight UFC career.

Roman Bogatov was released from his UFC contract following a loss to Leonardo Santos at UFC 251 in July. The news was first reported by TASS, from Russia. Roman Bogatov confirmed that he’s parted ways with the promotion to Russian news agency TASS.

Roman Bogatov's contract with the UFC has been terminated after one fight in which he hit his opponent with 3 or 4 illegal strikes.

Roman Bogatov said while talking to tass “Yes, they told me today they had terminated the contract,” Bogatov said, clarifying that he hadn’t been given a reason for his release.

Bogatov’s manager later told the TASS media that the reason for the release is the illegal strikes Bogatov landed in his fight.

Previous to his UFC debut, Roman Bogatov had an impressive 10-0 MMA record including a reign as the M-1 lightweight champion. He is the latest fighter to be released by the UFC following the news of Ray Borg getting his contracts terminated a few days back.

After his victory over Roman Bogatov, Santos stated on the illegal strikes and the fight

“I expected a great fight,” he said. “He’s a warrior and I knew it would be a hard fight. … The fouls were weird because he did them three times. The last one, I saw him stand up and so I just blocked my ribs. Thanks to God to give me the strength to get to the end of the fight.“After my last fight, I asked for someone in the top 10 or top-five and no one answered me,” he added, looking ahead to his next fight. “So I don’t care. I’m healthy and happy. I’ll be ready.”

Roman Bogatav now is a free agent and has to try to resume his fighting career in some other organization.