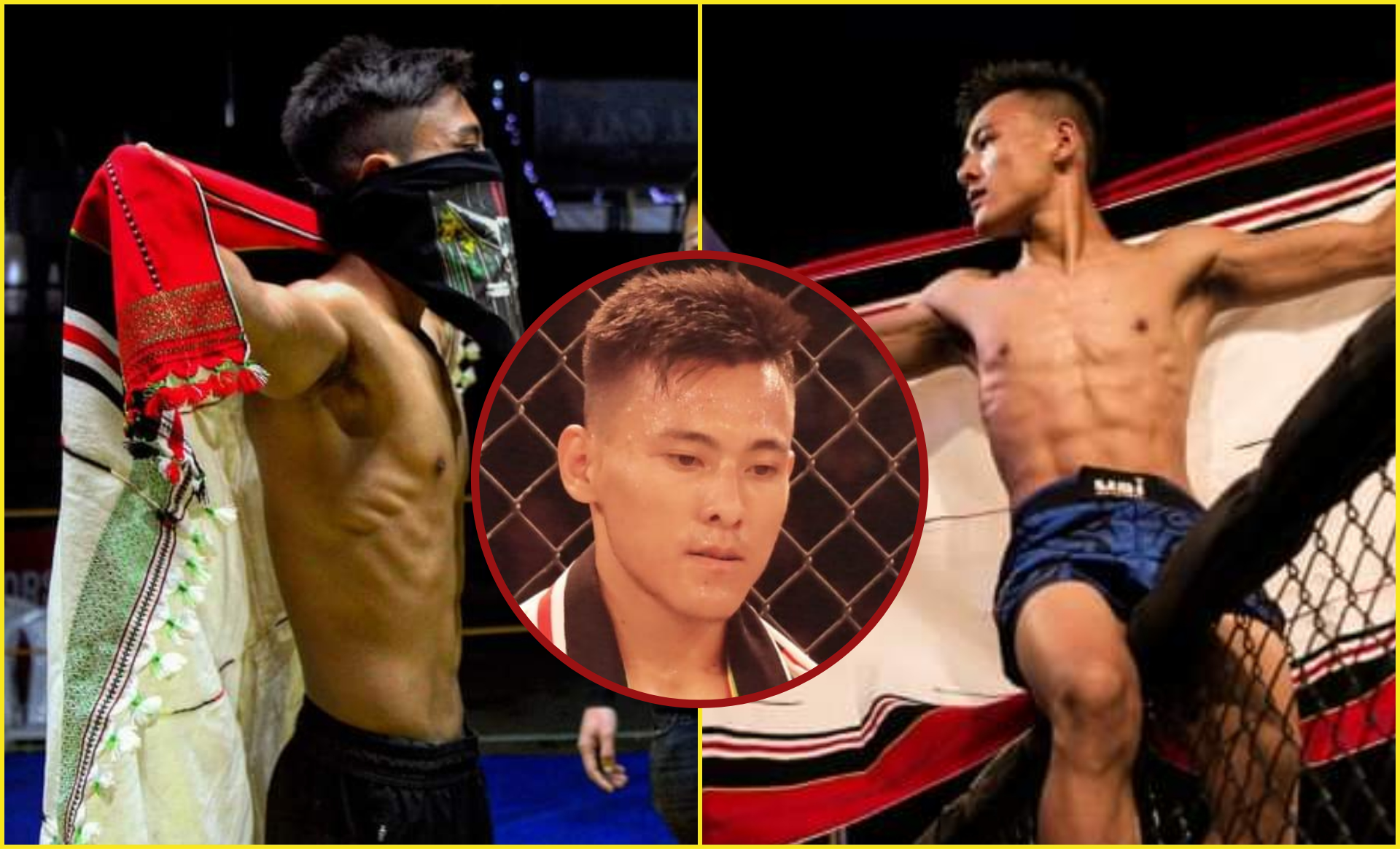 For the latest edition of the NE athlete profile, we reached out to Mairidin Newmai.

Over the past few editions, we have been heavily focused on Manipur, but for this edition, we reached out to Mairidin Newmai, who hails from Dimapur, Nagaland.

While being thousands of miles away from the national capital, Nagaland has often been ignored by the stuff that goes on in the mainland, however, the state of Nagaland has over the years has become a hotbed for MMA.

Mairidin Newmai has an amateur MMA record of 4-2.

1.) How did you get started into Martial Arts?

I got introduced to Martial Arts via Taekwondo back in 2012 when I was only fourteen years old. They were running a Taekwondo program and I joined them and initially, I trained just for fitness.

Then I started getting better in the sport and took part in a few competitions…Point Taekwondo (WTF) and I won a few medals and I got selected for the Nationals and I won the gold medal twice….two-years in a row.

Then I got introduced to the sport of Mixed Martial Arts through a friend…I watched the UFC light heavyweight title fight between Jon Jones and Alexander Gustafsson in 2015 and it got me hooked to the sport.

2.) When did you start training in MMA?

My good friend Kekhrieneitso Angami is also an amateur MMA fighter training alongside me and we used to go to school together and talked about our newfound shared interest i.e MMA and together we joined TCA – The Combat Academy, Nagaland. 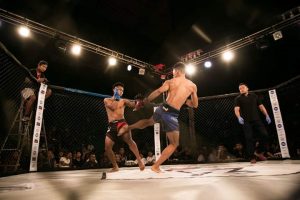 At that time TCA had also started gaining prominence and it was fairly a new academy and it had been in existence for around four-years and that’s when we decided to join and just one-year into my training, I was offered an amateur MMA fight, but I was in college and I was not able to take part.

3.) When did you start participating in amateur MMA bouts?

In the final year of college, I decided to take part in amateur MMA tournaments and I made my MMA debut at X1-international. All of my six amateur bouts have taken place in X-1.

4.) How hard was the transition for you from Taekwondo to MMA?

It was a very eye-opening experience. When I used to watch MMA fights, I thought it would be very simple and easy, but when it comes to ground fighting and close quarter boxing it was very hard. It was easy for me to keep my distance and kick, but when it came to pure boxing and ground game, it was physically and mentally hard for me to change my game and focus on my Wrestling and stuff.

Over time I have evolved more into a grappling based fighter and I like grappling more and fell in love with Jiu-Jitsu.

5.) How important of a role did you coaches play in helping you improve your ground game?

First of all, I would like to credit my head coach Khriemelie Metha and I credit everything to him and then we have a professional fighter at TCA named Imkongsunep Jamir and he was the one that used to push us during our wrestling and BJJ session and it was through training with them I realised that there’s more to this game then just standing and striking.

My coach always encouraged me and send me videos of BJJ and tell me how to improve my ground game and how important the ground was in MMA.

6.) What style of fighting do you prefer more in MMA? Are you more grappling centric or do you like striking more?

Right now I am still in an experimental phase. Sometimes when I fight, I try to keep it standing and some of the fights I have finished on my feet and some of them have been completed on the ground.

In my last fight, which I lost, I tried to keep it standing and my opponent was a better striker than me and I lost the fight as I completely ignored my wrestling fundamentals. I am still learning and getting better and eventually, I want to be good in all the aspects of Mixed Martial Arts.

7.) Which is the toughest fight of your career till date?

It would be my most recent fight. It was going well and my corner thought I had taken the first round and that it was a 10-9 round as I was outstriking him. I made some fundamentals errors in that fight and I got knocked out in the second round.

What this loss taught me was that this is a fight game and anything can happen anytime. Another important fight would be my second fight which took place in Delhi. I was fighting one of the guys from Dynamic Kickboxing and I was fighting a guy named Siddhart and he defeated me via decision.

It was a good fight and I tried to wrestle for most of the fight and he managed to stuff most of my takedowns. It was a close fight and he took it by the decision and now we are good friends. That fight also taught me a lot.

8.) Do you feel that the level of training that you’re getting in Nagaland is sufficient or do you feel the need to explore other opportunities?

We (TCA) lag behind in resources when compared to gyms in other states and countries, but the team that we have here is one of the best in the country and we are not just a team, we are like a family and we help each other out.

But yes in later stages I hope and I feel one should expand their training and even explore overseas to gain knowledge and hopefully come back and share the experience and knowledge.

9.) How has COVID-19 affected your training?

For the first two months, there was complete lockdown, we didn’t do any training. But with the unlock process in place, the training session is resuming.

One of my training partners stays nearby, so what we do is that we contact each other in the afternoon and in the evening, so we train in two-pairs and other pairs train together in a different time interval.

We all have keys to our gym and we are not allowed to train together. Some of us go early in the morning, some of them train in the evening. That’s how we have been training through the lockdown.

10.) When are you turning professional?

11.) Where do you see yourself in the next couple of years?

Right now, I want to go as far as I can. If we look at the Indian MMA scene, there’s Matrix Fight Night, which is the only MMA promotion that makes sense in India.

The next feasible promotion might be BRAVE CF if I perform well at the IMMAF championship since they have tie-ups. Then we have ONE Championship, as they are also looking at lots of fighters from India and eventually even UFC.

12.) Recently Roshan Mainam of Manipur also made it to ONE, do you feel like you can be the guy from Nagaland who makes it to the big leagues in the MMA?

That’s the goal, that’s the aim right now and I really feel that I can be the guy. My coaches see the potential in me and I believe in myself. There have been few setbacks, but it’s a part of life, we fall down but we get back up.

There are way better guys than me in my gym, but I feel like even I can make it to the high level.

13.) What are you doing these days? Are you a student or are you working somewhere?

I graduated from college and I am a teacher in a private school and then we give out private training sessions in the gyms and that’s how I am earning to compliment my training.

14.) What do your students think about your fighting?

The boy students think it’s cool and our society here in Nagaland is very reserved. We still look down upon our athletes. Most of our society doesn’t see any potential in sports, especially in professional sports.

It’s hard to explain to them as to what being a professional athlete means and hope me and the other guys we open more avenues for the people.

15.) Did you get the necessary support of your family in order to continue fighting?

I have been fortunate enough to get the support of my family. It was not easy as I had to convince them and after they witnessed some of my fights which took place in Nagaland. They saw my dedication towards the sport and how much effort I put in my training and how much I love the sport.

So eventually they came in terms with me fighting provided that I knew what I was doing and the road I was headed towards.