Malik Waiting for His Chance to Shine In MMA

Faisal Malik one day hopes to bring UFC to Pakistan and headline a card in the country. The British-born fighter from Luton has Asian heritage and if he were able to promote the sport in Pakistan, it could help generate much more interest in MMA.

Malik is still in the early stages of his career. He is unbeaten with a 5-0 record and is now signed to Cage Warriors, a European MMA circuit. This is the next step in his career that he will need to overcome in order to make his dream of appearing in the UFC. 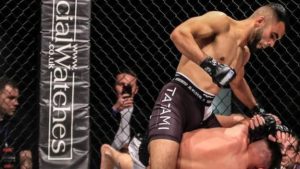 The 27-year-old has wasted no time in his professional career so far. All five of his fights have been won in the opening round. In fact, none of the five contests have lasted more than a minute, as Malik has been clinical.

In many ways, it is surprising that MMA has yet to really open up in Pakistan as it has in other countries. There are betting markets on many of the major MMA events such as the UFC, so there is some appetite for the sport. Additionally, if Malik can continue to progress up the ladder, there is sure to be yet more interest in his career.

Another reason why it’s surprising that MMA doesn’t have a bigger presence in Pakistan as there are sites for online betting in Pakistan where there is no shortage of MMA markets, which get a lot of engagement. Some of these sites offer live streaming of MMA fights so fans in Pakistan can watch the action, even when it is not covered by local broadcasters.

No British-Asian fighter has ever been a UFC champion. That will be one of the many goals Malik will have. If he is able to win a major belt, he is sure to attract a lot of interest in his fights, not just in the UK and Pakistan, but in other countries with a burgeoning interest in the sport too.

History Of Fighting in Malik’s Family

Malik comes from a strong background in fighting. His grandfather was a wrestler in Pakistan where he was a champion. The current Cage Warriors fighter trained as a boxer when he was younger. He then turned to Brazilian Jiu-Jitsu at the age of 16.

The unbeaten bantamweight turned pro when he was 22. He has admitted that he used to struggle with his weight, but MMA helped him to get into shape and turn his life around.

Cage Warriors is a popular route fighters take into UFC. More than 100 have successfully made the leap, and many of which are having a lot of success in the UFC today. Malik has been tipped by many pundits in the sport to make it all the way to the leading MMA brand.

Malik is waiting for his next opportunity to shine in MMA. He has not competed since November 2020 when he beat Andrei Bogus in the first round. The referee in that fight stepped in to stop the contest in order to protect the Moldovan.

The rising star from Luton grew up idolising Mike Tyson and later Khabib Nurmagomedov, he will be working as hard as he can to emulate some of the success they had in their respective disciplines.