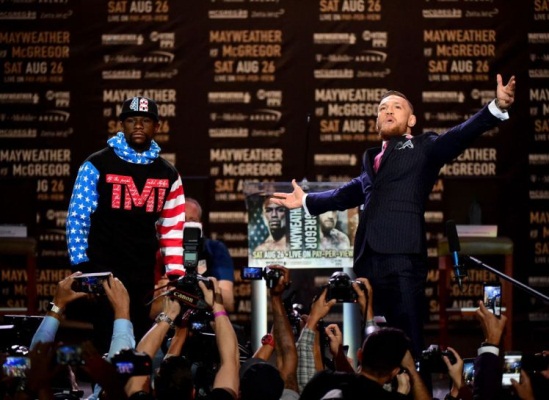 Only two months ago this was only a rumor that caught everyone’s attention and now with one day away from the biggest show down in the history of combat sports, it’s simply unbelievable. The weigh-ins is over with some intense stare downs and the fighters are ready. In 24hours the king of MMA, ‘The Notorious’ Conor McGregor will fight the king of boxing, Floyd ‘Money’ Mayweather for the newly customized ‘Money belt’.

But before the mega fight some of the experts have a thing or two in their mind which they would like to share with the rest of the world.

The Pakistani-British boxer also opined on the fight ending in Mayweather’s favor in between round six to round nine. Despite McGregor having a solid chin, Khan says that McGregor won’t be able to take shots repeatedly by the best boxer in the world.

Back to MMA, The legendary five time UFC champion Randy Couture felt that McGregor has only ten percent of winning the fight. Despite McGregor being a younger fighter than the American, he has no real chance of defeating the twelve time boxing world champion as he is competing in a pure boxing match against ‘the best ever’.

“I think Mayweather’s going to win this, I think it’s going to be a 12-round typical Mayweather performance,” Couture said to Ariel Helwani. “It has that potential (to be a dull fight). Floyd is that elusive. He’s talking about, ‘Oh, I need to be the aggressor because of the Pacquiao fight and all these things.’ I get it, but he’s 49-0 for a reason. He knows what he’s good at. He knows what’s gotten him to that point.”

Former boxing champion, Chris Eubank praised McGregor’ ability to rise back to stardom after his devastating loss to Nate Diaz at UFC 196.

“That’s what makes him also a dangerous man. A man who understands condition,” Eubank said. “You lose with your head high, not with your eyes down and belligerent. That would say that he’s not dangerous at all. The fact that he lost like a gentleman tells you something about his code. He has honor. That’s why this fight is a very interesting fight to me.” Eubank feels that the outcome of the fight depends completely on who the toughest man is.

Hall of Fame Boxing Referee Joe Cortez was brought into McGregor’s training camp to help him get familiar with the boxing rules and also getting used to being supervised by a boxing referee during his sparring sessions.

After his work with McGregor, the referee had praised The Notorious one:

“In boxing we all know that you can get old overnight, so we’ll have to see which Mayweather comes out,” Cortez also pointed out that Mayweather is 40 years old now and is no longer as young as his opponent.

“Some of the fighters in boxing break the rules, but given he’s such a good listener, I 100 percent think he’ll abide by them. He picked up real quick, right from the first class he did very well. McGregor’s a good student. He has what it takes to be very successful Saturday night.”

On the other side of the boxing world, former ten time boxing world champion, Oscar De la Hoya had some harsh words for the participants of the mega-fight. He tweeted out his opinion with some profane language regarding the Mayweather versus McGregor fight.

FUCK YOU #MayweatherVsMcGregor BOTH OF YOU ARE DISRESPECTING THE SPORT OF BOXING #CaneloGGG Sept 16th https://t.co/SX1Co1Uuj8

In the past UFC President Dana White has been very vocal about his dislike towards Top Rank promotion’s chief, Bob Arum and Golden Boy Promotion’s chief Oscar De La Hoya. A day later, after De La Hoya tweeted his thoughts about the mega event, White responded in a comic fashion-

We are less than 24 hours away from the biggest fight in the history of combat sports. Hopefully, this time Mayweather won’t disappoint the fans the way he did by putting on a dull performance against his former rival Manny Pacquiao. On the other hand, we can expect nothing less from Conor McGregor.

Previous articleMcGregor – Mayweather Jr. breakdown: Can we stop talking about angles? by Akhilesh Gannavarapu
Next articleMayweather vs McGregor: How Conor Wins