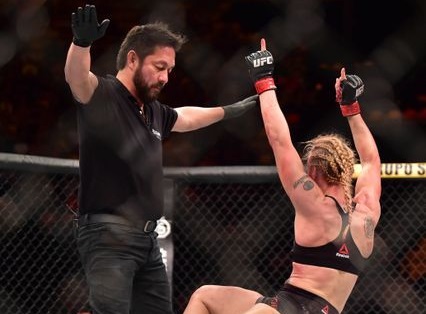 Mario Yamasaki is currently on the wrong side of the MMA community due to his late stoppage of the fight between Valentina Shevchenko and Prisicila Cachoeira at UFC Fight Night 125.

The MMA community on various social media platforms had hit out at Yamasaki over the issue and the veteran referee even drew criticism from UFC president Dana White.

In a recent interview with MMA Junkie, Yamasaki opened up about the situation and revealed his side of the story.

“Every time I went to stop it, I signaled it to her, and she moved in an attempt to escape the blows. Unfortunately, I also can’t control the number of strikes that are thrown. Again, while she’s looking for a turnaround, she’s in the game. Fighters go through periods of great effort and dedication in order to be there. MMA is a contact sport, and no fighter likes to have the fight interrupted without a chance to reverse the outcome,” Yamasaki said.

According to Yamasaki, he was just letting ‘Pedrita’ be a warrior and also said that people have the right to issue opinions.

Meanwhile, Cachoeira suffered a torn ACL and meniscus in the fight and is expected to be out for more than six months.