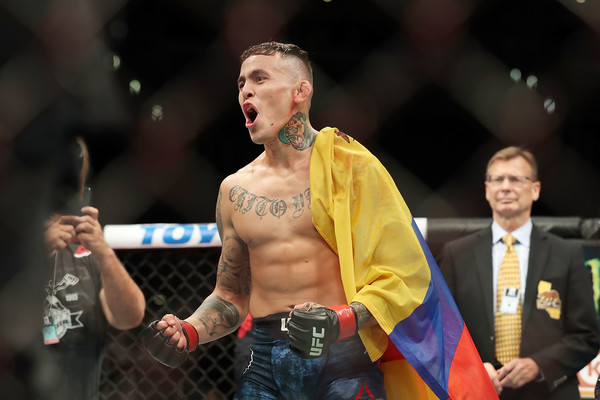 Sean O’Malley’s suspension ahead of UFC has landed Marlon Vera without an opponent for UFC 239. As of now, his status remains unclear and given the short turnaround time, it is doubtful whether the UFC can find an opponent for the bantamweight. However, all Vera wants to do is do his job of fighting.

This was O’Malley’s second suspension in a span of less than a year. His last act handed him a ban of six months by the USADA. However, this time around it was Nevada State Athletic Commission that had an issue with “Sugar”. Regardless, none of this really concerned “Chito” Vera who was visibly upset with not getting the fight he had prepared for.

“(Expletive) him,” Vera said in a telephonic interview with MMA Junkie. “I don’t know what’s happening. I really don’t know if he’s really cheating or not. Again, (expletive) that guy. He was just an opponent, and I’ll wait for another guy. Hopefully, they can find me a replacement. If they don’t do it, then I cannot stress for stuff I cannot control.”

Vera isn’t still very sure about O’Malley’s situation. However, what is clear is that he is entirely fed up of the same.

“It’s the second time he tested positive. It’s weird because a couple of guys from that gym tested positive, too, so I don’t know what’s going on. But I don’t (expletive) care. I’ll keep my mind positive and keep going forward. Acceptance over everything. You’ve got to accept this stuff that is happening. It is what it is. There’s nothing I can do, right?”

The UFC is still searching for a replacement for the Ecuadorian. UFC 239 is supposed to go down on July 6th at the T-Mobile Arena in Las Vegas, Nevada. Vera had been doing extremely well in fight camp. Hence, he doesn’t want to see his efforts get wasted.

“Everything was going actually very well,” Vera said. “My weight and my training has been very good. I was just waiting to go in there and fight with (him). I was just waiting for going in there and fighting – getting ready for the fight. We’re going to re-plan and rethink and see what’s available. I’m waiting for the UFC to see who’s available. They’re calling people now.”

Despite training hard, Vera doesn’t want to go through the gruelling weight cutting process, if an opponent isn’t guaranteed.

In the end, Vera didn’t mince words about about how he sees O’Malley as an opponent.

“My job is to get ready, fight and try to (expletive) that person up,” Vera said of his next opponent. “That person is trying to take all my dreams away, all my kids’ dreams away – (dreams from) my wife. Whoever is my opponent is my (expletive) enemy.