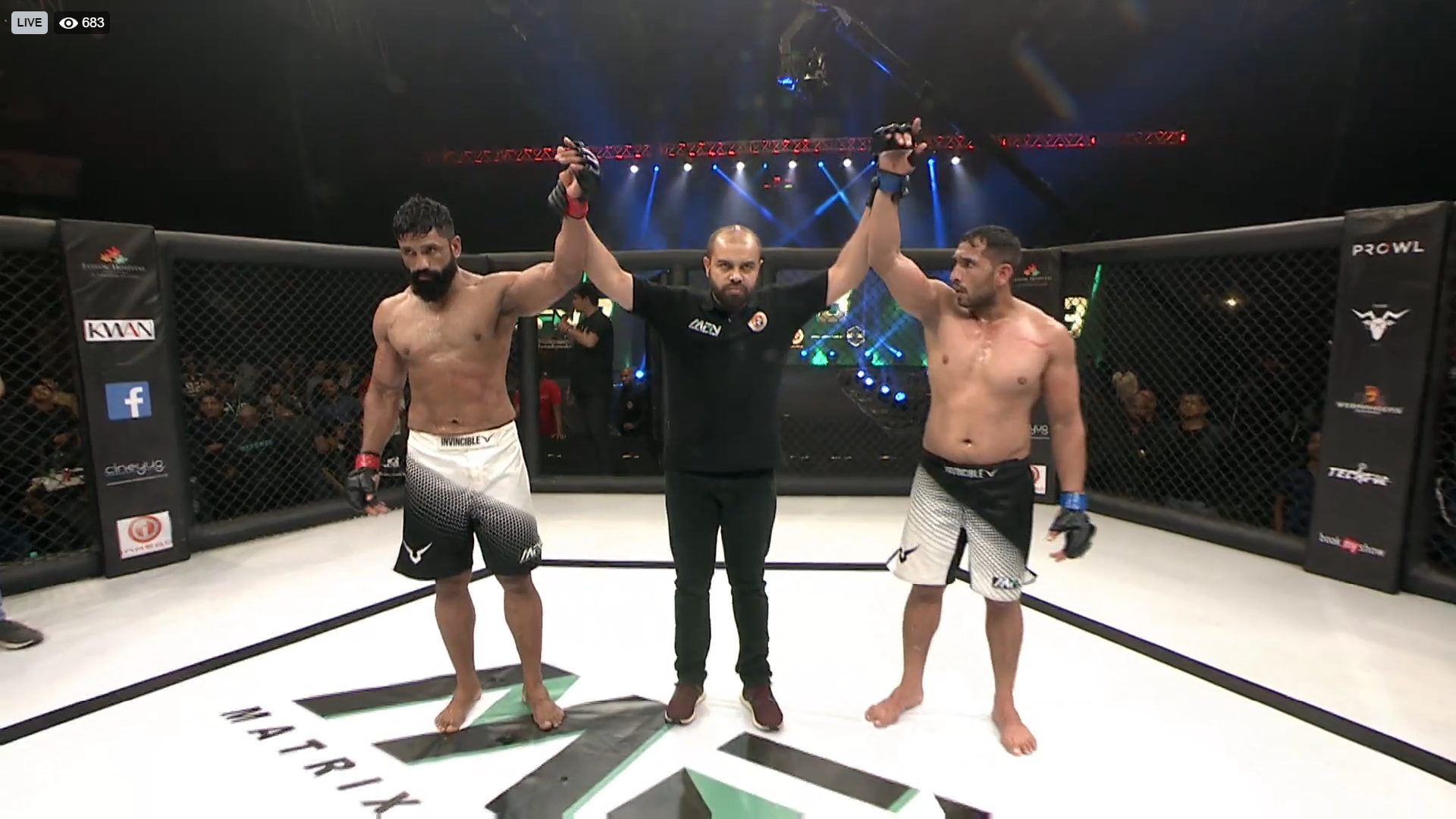 Matrix Fight Night 3 is all set to kick off at the NSCI Dome in Mumbai. After a successful two edition, the third fight night card will feature some of India’s best fighters.

The last edition i.e MFN 2 took place in Delhi and it saw Srikant Sekhar beating Jason Romesh Solomon via kimura in the first round. For the third fight night card, Sandeep Dahiya will take on Pawan Maan in the main event.

MFN 3 has announced 7 fights for the third edition of the fight night. Here is the full fight card.

MFN which is a venture of Bollywood superstar Tiger Shroff has invested a lot in the sport of MMA. Both of MFN’s card has been a huge success and has given fighters a platform to showcase their skills.

The fight will be streamed on Matrix Fight Night Facebook page.

WHAT TIME WILL THE FIGHT CARD START?

The entire fight card will start streaming from 6 pm.

The MMA India Show will run a live blog for the entire fight card of Matrix Fight Night, where you can catch up with results:

Abhimanyu Rai continues with his 2-0 win streak at MFN 3 by handing a thorough smackdown to Shashikant, leaving no scope for second guesses. 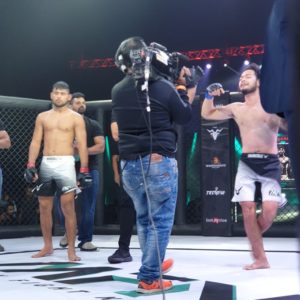 Steamrolling Surya with a one-sided call from the judges, Siddharth Singh Dhami maintains his win streak, bringing it to 2-0 at MFN 3.

Krishna Heer Winner (Featherweight Category) by Technical Knockout, wraps up the battle with power &skill through a TKO, charging the cage with energy &excitement.

Both fighters making their way to the cage.

ROUND1: Nice leg kick by Dhruv and he drops Sumeet. The UP fighter takes a shot to the face but takes it very well. Sumeet missed an overhand right and then Dhruv missed a leg kick.

Dhruv rushes with his punches and lands a few shots on Sumeet. Huge shots landed by Dhruv and then Sumeet follows up with a kick. Dhruv now has Sumeet pinned to the cage.

Dhruv still has Sumeet pinned to the cage. Both fighters tiring themselves up. Dhruv lands some inside kick from the clinch. Dhruv follows up with a knee.

END of round 1, Dhruv takes the round on my scorecards.

ROUND 2: Great kick by Sumeet Khade and then Dhruv follows up with a failed attempt in double leg takedown. Now, Sumeet Khade goes for the takedown and pushes Dhruv to the cage, but fails to take him down.

The referee breaks the fight in what looks like a low blow from Dhruv.

Sumeet Khade goes for another takedown and then successfully implements a body lock takedown.

End of round 2, Sumeet Khade takes the round on my scorecards.takedown

A brutal elbow lands on the face of Dhruv, but the UP based fighter takes it like a champ. Sumeet Khade goes for another double leg takedown but Dhruv is defending well. Dhruv displaying superior clinch position.

Nice elbow by Dhruv with 80 seconds remaining on the clock. Dhruv lands a low blow and Sumeet back in action. End on ROUND 3.

Now we go to the judges and Dhruv defeats Sumeet via UD.

ROUND 1: Punyajit with a nice leg kick and then follows up with a 1,2.

Punyajit is extremely light on his feet. Nice Right hand by Mayank and then pins him to the cage, but Punyajit manages to get out and then follows up with a nice 1,2.

Nice head kick by Mayank Kohli and now Punyajit follows up with a head kick.

Nice uppercut followed up by overhand right by Mayank. A right leg kick from Punjajit and now he takes Mayank down and he is now present in a half guard.  Mayank now has Punyajit’s leg wrapped up and then follows up with a heel hook.

ROUND 2: Mayank with a low blow. The referee now pauses the fight and now Punyajit follows up with a right leg kick. Nice knee to the body by Punyajit and is working very hard for the takedown and is successful.

Punyajit showing his superior ground game and now Mayank rallying back strong at the end of the round and landing hard shots.

ROUND 3: Both fighters hug each other to start the round. Punyajit with a leg kick. Mayank now pushing Punyajit back to the cage. Mayank goes for the takedown and is successful.

Punyajit now gets the double leg takedown. Great late rallying for the Assamese lad. He is now celebrating.

ROUND 1: Nice jab by Amit Raj and both fighters are in clinch right now and the referee breaks them up. Jubli now follows up with a double leg takedown and now Amit Raj pulls out and has Jubli in a tight guillotine and now Jubli manages to break free.

Jubli lands some close-range punches on Amit Raj and then follows up with huge elbows and now the round comes to an end.

ROUND 1: Both fighters circling the cage and Nikhil lands a low kick to the groin of Gulliya. Both fighters then follow up with a kick. Both fighters now refusing to engage. Nice kick by Nikhil and then Gulliya goes for the takedown.

Nikhil then attempts a superman punch and then follows up with a spinning back fist. Great shot by Nikhil and now he has Gulliya hurt.

ROUND 2: Nice Kick by Nikhil and then he lands a right hook on the shoulder followed by a flying knee and now Gaurav has managed to take Nikhil down.

Gaurav now on top and he is landing elbows on Nikhil and then now he attempts to go for a rear-naked choke. Gulliya is landing hard shots on Nikhil.

A very dominant round for Gaurav Gulliya.

ROUND 3: Little to no action in the first minute of the third round. A right hook drops Gaurav Gulliya and he is hurt and he is looking gassed out. Gulliya goes for the takedown, but Nikhil makes a comeback and TKO’s Gulliya.

Nikhil Bhatt knocks out Gaurav Gulliya in the third round#MFN3https://t.co/XDeAmHIl5A

Overhand right misses for Angad Bisht and then follows up with a jab.

ROUND 2: Angad slips and then Jacky Gehlot pouches on him and goes for the ground and pound, but Angad escapes. Angad follows up with a head kick and a jab.

ROUND 3: Jacky Gehlot lands kick on Angad’s swollen shin. A punch from Jacky drops Angad, but the Uttrakhand based fighter manages to recover quickly.

Both guys showboating in the final 30-seconds of the fight. Gehlot goes for the overhand right but misses by a wide margin. The round comes to an end and both fighters embrace each other.

ROUND 1: Prakram starts swinging wild punches and pushes Seth to the cage, but Seth manages to take Prakram down and he gets in the mount position and goes for ground and pound,

Seth Rosario goes for the triangle and Prakram is trapped in a hammerlock position and the Delhi native is showing lot of heart. Seth gets into side control and then follows up with huge elbows.

Great ending to the first round by Seth Rosario after getting pounded with wild swings early in the round.

ROUND 2: Same start to the second round by Prakram as he is using wild swings. Seth Rosario now manages to take Prakram down and lands in heavy punches.

The referee needs to stop the fight. It’s getting one-sided and Seth is raining down punches on Prakram. Now Seth goes in for the RNC and Prakram taps.

OFFICIAL RESULT: Seth Rosario chokes out Prakram Dandona in the second round.

ROUND 1: Both fighters start with head kicks. Pawan Maan lands huge shots on Sandeep Dahiya, but Dahiya walks off without flinching.  Nice sidekicks by Sandeep.

Pawan Maan applying huge pressure on Dahiya and now he holds Maan up against the cage with double hooks.

ROUND 2: Sandeep landing hard shots early and then follows up with an uppercut. Huge right hand from Pawan Maan staggers Dahiya and then Maan drops Dahiya with a huge right hand.

Sandeep then lands elbows on Maan on is back. Sandeep has an opportunity for a heel hook and now he elbowing Maan’s kneecaps. Maan the lands a huge uppercut on Dahiya which hurt him bad. Sandeep’s now has a cut under his eyes.

Great round for Pawan Maan, he hurt Dahiya on numerous occasions.

ROUND 3: Maan lands a kick on Dahiya’s side of the head in heel hook position. Maan landing brutal uppercuts on Sandeep Dahiya. It’s an entertaining fight. The main event is living upto it’s hype.

Maan is completely dominating the fight now with just 60 seconds left on the clock. Maab is stalking Sandeep and landed a brutal body shot at the end of the round. Dahiya has buckled. He is hurt.