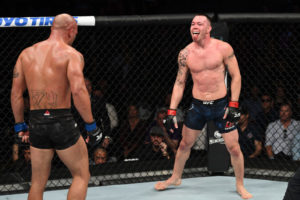 Immediately after the fight, Covington started his verbal antics which included taking a dig at former champion Matt Hughes.

However, Hughes isn’t losing any sleep over it and he said that in the fight game, people must have a thick skin.

“Not sure if Colby Covington should have used my accident as fuel for his post-fight trash talk, but that was one heck of a fight,” Hughes wrote on Instagram. “Reminder though, this is the fighting world. People talk trash and you gotta have thick skin.”

Do you guys think Colby crossed a line while referencing about Hughes?

Previous articleHow much Brock Lesnar was actually paid at UFC 100 would blow your mind!
Next articleWatch: Colby Covington and Kamaru Usman have to be restrained at the ESPN desk