Mauricio “Shogun” Rua finally managed to put his record back in the winning column (Sat., Dec. 1, 2018) at UFC Fight Night 142 live on Sony Six from inside Adelaide Entertainment Centre in Adelaide, Australia, when he finished Australian contender Tyson Pedro via third-round TKO.

Mauricio ‘Shogun’ Rua lost his previous fight back in a brutal fashion against Anthony ‘Lionheart’ Smith via knock-out in the very first round. This was a much-needed win for the Brazilian contender as he just has two more fights left in his UFC contract.

His recent win over Tyson Pedro was very important for him, as bad it was for Pedro. His knees buckled mid fight and Shogun Rua also noticed it. 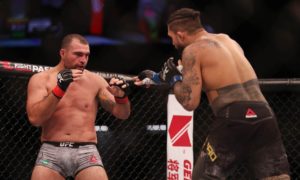 During the post-fight interview, Rua revealed he wants to fight for the title.

“One more fight, I am ready for the belt,” Rua said with a smile.

“I won four out of five, but I know I don’t deserve the belt yet,” Rua said. “There are people ahead of me in the title line. My focus now is fighting in Curitiba, in May (though Rua’s hometown of Curitiba has been speculated as a possible destination in Brazil, it hasn’t been confirmed by the promotion yet). That’s my focus. I don’t think about the belt because I know it’s not my shot yet.”

Even though he is 37-years old and has two-fights left in his contract, he isn’t done yet.

“I face every one of my fights as if it was my last,” Rua said. “I don’t know when I’ll stop, but I’m taking it step-by-step. I intend to, at least, fulfil my UFC contract.”

Rua proved a lot of people wrong with his performance as he was the heavy underdog in the fight and that performance sure has turned many eyeballs. Only time will tell if he will be offered a title shot or not.