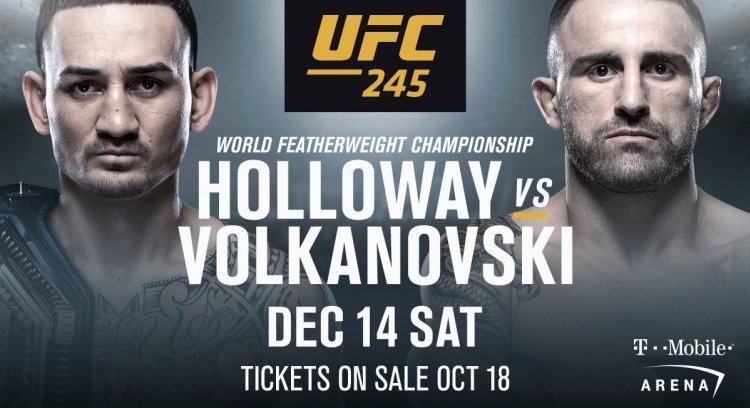 As one of three title fights, UFC featherweight champion Max Holloway looks to net his 15th consecutive win at 145 pounds by taking out one of the division’s toughest contenders, Alexander Volkanovski.

Holloway is on a 14-fight win streak and has not lost in his division in over six years. In his stellar career, he holds wins over former champions Jose Aldo (twice), Frankie Edgar and Anthony Pettis.

Volkanovski became the No. 1 ranked featherweight contender with a 17-fight win streak, with wins over Jose Aldo, Chad Mendes, and Darren Elkins.

Holloway said, “This is mixed martial arts. Every two weeks there’s a new face in the game.. I will be here. I’ll stay here. Whoever you put in front of me, I will fight.”

Volkanovski said, “I believe I’m too strong for these featherweights. Maybe I’ll move up, too.”

Volkanovski said, “Aldo was just another job. After I won, reality hit, and I was able to soak in that I beat one of the all time greats.”

Holloway said, “When he fought Aldo in Rio, and he got it done. He did enough to win the decision. Good for him. He’s the number one contender now and I get to see him on Saturday night across the Octagon.”

HOW THE FIGHT WILL GO

Holloway said, “We’ve got a bunch of questions that Alex presents, and we can’t wait to answer them. I’m getting anxious and excited.”

Volkanovski said, “I’m the guy for the job. The things that he does very well, just do not work with me. Basics like wrestling, strength and power go a long way. But I believe my high fight IQ and calculated style pull it all together. It will definitely be a challenge for Max and all the future opponents.”

Holloway said, “My son is here right now with me. It’s giving him experience. We don’t know when this ride is going to end. It’s life experience: the ups and downs, the good times and bad times. He’s only seven. He was born on the same day as I got my UFC contract. I can literally say he was born into this life.

Volkanovski said, “This fight is very important. It means success for the future for my family. Family is everything for me, this is why I do my job. I’m winning that belt for them.”

In this featherweight thriller at UFC 245, Max Holloway hopes to continue his dominance over the featherweight division against surging contender Alexander Volkanovski.