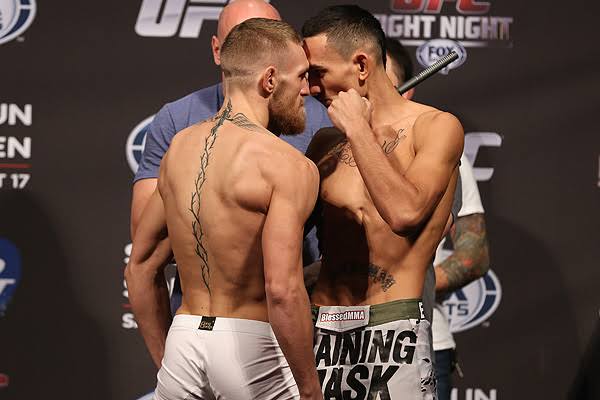 Irish superstar and former featherweight and lightweight champion ‘The Notorious’ Conor McGregor is undefeated at featherweight. McGregor ran through the entire division via brutal finishes however there was one man he couldn’t finish. He himself went on to become a champion, current featherweight king Max ‘Blessed’ Holloway.

McGregor is known for his marketing tactics as he skillfully backs his on stage brash attitude with incredible performances. It may seem over the top like it did for lightweight champion Khabib Nurmagomedov leading to the infamous UFC 229 post-fight chaos, however Holloway believes McGregor never crosses the threshold line. 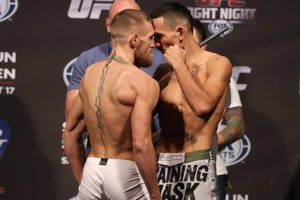 “The way he talks is business, and business is business,” Holloway said when speaking to MMA Fighting. “I understand that point of business with someone. There might be a point where you cross a line where it’s not business anymore and it gets personal but he never did that. He never crossed that line. That’s what I respect about him.”

Holloway pointed out two instances which showcased McGregor’s compassionate behavior. Holloway recalled the time when he had stepped up to take on Nurmagomedov on short notice at UFC 223 back in April 2018 but could not fight when the commission thought he was cutting a lot of weight.

Another instance where Holloway was slated to take on Brian Ortega at UFC 226 in July 2018, when Holloway had to pull out due to an undisclosed reason which was rumoured to be a stroke.

“[Conor] was the first one that asked me, that tweeted how everybody was saying this stuff [about the fight being cancelled] but nobody was asking about how I was when the whole [Khabib Nurmagomedov] thing happened,” Holloway said when referencing how he was pulled from a lightweight title fight on short notice.

”When the July thing happened [with Brian Ortega] and then even walking out to the Frankie Edgar fight, he showed me support. He has a heart.”

UFC: Jorge Masvidal: Nick Diaz will want to avenge his ‘little brother’ and that pumps me up!

Previous articleUFC: See the ridiculous win streaks that Khabib Nurmagomedov and Tony Ferguson have been on ahead of their clash
Next articleFrancis Ngannou and Alexander Volkov verbally agree to slug it out