A mouth-watering rematch clash between UFC featherweight champion Max Holloway and top lightweight contender Dustin Poirier has been set for UFC 236 for the interim lightweight title at UFC 236 to be held on 13th April 2019.

The news was first reported by Brett Okamoto of ESPN. The fight will take place in Atlanta. It was initially reported that Max Holloway will fight Tony Ferguson for the interim title, but according to Dana White, former interim champion Ferguson turned it down. 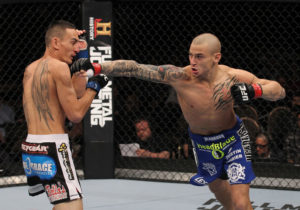 The current UFC lightweight champion Khabib Nurmagomedov is serving a nine-month suspension for his involvement at the post-fight brawl which took place at the T-Mobile Arena last October after he submitted Conor McGregor in the fourth round. However, despite his suspension ending early, Khabib had made it clear that he won’t be fighting until November.

Max Holloway is currently coming off of a dominant TKO victory over Brian Ortega at UFC 231 last December. He is also riding on a 13-fight winning streak.

Dustin Poirier is also coming off a TKO victory over former lightweight champion Eddie Alvarez at UFC on Fox 30. He is riding on a 4-fight winning streak.